An opening reception at the Hendry House this evening, from 6-8 p.m., will allow residents to meet local artists over light refreshments while kicking off a week of art shows, workshops, and sales. The celebrations feature 35 Arlington-based artists.

The week of events, in its fifteenth year running, will be held at Fort C.F. Smith Park, at 2411 24th Street N. All events are free admission.

Artistic workshops cover a variety of mediums, from watercolor to oil bars to canvas floor painting. A full list of workshops and kids activities can be found on the Arlington Artists Alliance website.

Organizers have advertised the following hours for the festival:

A new Clarendon art gallery run by the Arlington Artists Alliance will temporarily occupy the space that formerly housed Fuego Cocina y Taquileria, and they won’t be paying rent.

Gallery Clarendon put up signs last Friday (March 9) and intends to open to the public by April 1. That’s so long as the alliance receives its occupancy permit in time, according to Jane Coonce, Gallery Clarendon’s executive director.

Until a permanent commercial tenant is found, the gallery, built and developed by volunteers, will stay and only pay utilities. Crystal City’s Gallery Art Underground is run in a similar way as Gallery Clarendon by Arlington Artists Alliance.

While the first floor will be a gallery, the second will be artist studios with art classes, including oil painting and pastels lessons, for children and adults. Coonce intends to offer a painting class with wine.

The first installation, according to Coonce, will likely feature the work of those who volunteered or donated toward building the space. Later installations will feature primarily Arlington artists and occasionally artists from nearby Northern Virginia locales.

Coonce added that there’s been excitement by both volunteers and the public for the new space to open.

“All the artists are excited. Even the people that walk by, when they stuck their head in before we put our little signs on the window, they said ‘what’s going in here?’ said Coonce.

A new exhibit at Crystal City’s Gallery Underground, in the shops at 2100 Crystal Drive, might hit too close too home for some new parents.

“Screaming Babies” is a solo exhibit by artist Linda Lowery on display now in the free and open art space. Lowery has been drawing infants in states of “raw emotion” for years, in myriad colors, sizes and methods.

The pieces are all available for purchase. The exhibit will run until Saturday, March 28 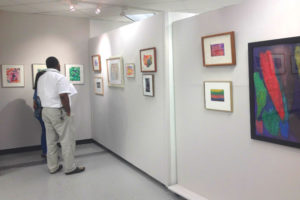 Artists with disabilities have their own show at the Gallery Underground in Crystal City.

The show is called “Making Their Mark: Art Brut,” and highlights pieces from artists with disabilities from ServiceSource day centers, a non-profit disability resource organization. It is put on in partnership with Purple Art, an art therapy program that works with individuals with disabilities and with military members and their families.

“Sometimes, I feel like Van Gogh,” artist Andrew Ross told ARLnow.com. “Music and art go together with me. I enjoy making both of them, they are big part of me”.

“Art Brut” translates to “raw art” and describes works created without classical art training. It’s an opportunity for the artists to overcome challenges and to express themselves in different ways. Some of the artists created pieces with little or no assistance for the first time.

“It’s good, I did a lot of work on the art,” artist Robert “Bobby” Hoffer told ARLnow.com

Volunteers donated many of the framing materials for the exhibition, in addition to volunteering to frame, mount and curate the show pieces.

“Making Their Mark: Art Brut” runs through August 23. More information can be found on the Gallery Underground website. 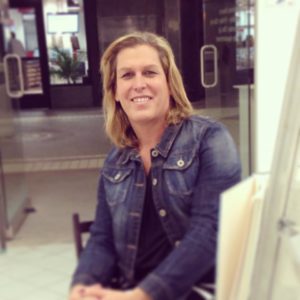 (Updated at 6:35 p.m.) A former U.S. Navy SEAL is hosting an art fundraiser in Crystal City next month to raise money for veterans returning home with post-traumatic stress disorder (PTSD) and other combat-induced disabilities.

Alexandria-based nonprofit The 296 Project will host a gallery show and silent auction at Gallery Underground (2100 Crystal Drive) of U.S. Navy Senior Chief Kristin Beck, a transgender, 20-year veteran of the Navy whose art “kept her from suicide on more than one occasion,” according to a press release for the event.

Beck, who took part in seven combat deployments with the SEALS and was awarded a Bronze Star and a Purple Heart, was diagnosed with PTSD and a 90 percent disability rating.

The first ever transgender Navy SEAL, Beck “will be addressing the crowd personally,” and discussing the therapeutic effect creating artwork had on her recovery, according to the press release. She will also be advocating for The 296 Project, which “promotes, funds, supports and advocates for art and expressive therapies” for veterans when they return to the States, according to Executive Director Scott Gordon.

What was supposed to be a community benefit from an apartment development in Rosslyn is instead a barely used empty space, and one local resident is pushing for that to change.

The “art atrium” on the ground floor of the Bennett Park Apartments at 1601 Clarendon Blvd is open to the public from 9:00 a.m. to 9:00 p.m. every day, but its most common state is empty, with the lights turned off, and chairs stacked in the middle of the room.

This is the way the space — which has no art hanging on the wall, just eclectic lighting, a uniquely shaped brick column in the middle of the room and plants lining the walls — has been for six years since the building opened, says neighbor Soo Lee Davis.

“The last six years I’ve never seen the space used and the little bit of art that is in there is not well visited at all and it’s a complete waste of space,” Davis told ARLnow.com. “Right now, it’s just dead, 24/7 and in a prime location with tons of foot traffic and this area is in dire need of more options that are useful for the community.”

The space is part of the site plan agreement the developer, Washington Realty Investment Trust, reached with the county in 2002. In Arlington, developers often build specific “community benefits” into their projects in order to win support from neighbors and the County Board for taller building heights and other concessions. Department of Community Planning and Housing and Development spokeswoman Helen Duong said WRIT proposed the art atrium “from the beginning.”

“It was not requested by staff or the County Board, but we did provide for it in the site plan, so it is officially ‘required,'” Duong wrote in an email. “The developer did not receive density or any other value for it, as far as our planner can remember.”

Representatives at Bennett Park Apartments tout the atrium as an amenity for their residents to rent out for private parties, but, since the beginning of August, Property Manager Jared Bailey said he only knows of one such reservation, for later this month. According to the site plan, “the art atrium may be closed up to two times per month, for no more than one day at a time, for special events.” Other times, it’s intended for public use — for viewing art — despite the lack of actual art.

The atrium cost more than $300,000 to construct, but Davis is determined to see it transformed. The Radnor/Ft. Myer Heights Civic Association “doesn’t seem interested in taking up the issue,” Davis said, but she wants to find another avenue to turn the atrium into a use of greater benefit.

“Since it’s not being used as was intended for ‘community benefit,’ then I think it would make a great retail space, coffee shop or restaurant,” Davis said. “If the building owner would agree to contribute a portion of the rent that they charge toward some other county art endeavor (i.e. Artisphere in Rosslyn), then this could be a win/win situation.”

Update at 4:50 p.m.: Bailey “honestly doesn’t know how many people visit the space” on a regular basis, but he is working to “promote and utilize the space several times a month moving forward with different events for my residents.” He said the event later this month is a charity event, and is planning yoga and fitness classes in the future. 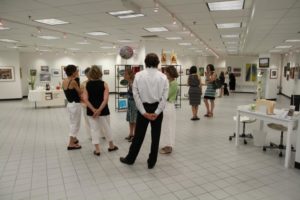 The Arlington Artists Alliance has a new place to call home: a formerly vacant storefront in the Crystal City Shops @ 2100.

The airy gallery space, which the Alliance has dubbed the Northern Virginia Art Center, features “works from area artists covering a broad array of materials and mediums, including oil, acrylic, watercolor, collage, pottery, glass and sculpture.”

The center will rotate exhibits on a monthly basis, and each exhibit will have its own unique theme. September’s theme will be “A Celebration of Color.” The current theme is “Individual Perspective.” The exhibits are juried, meaning each work must be selected by a judge or judges in order to be displayed. Many of the works displayed are also available for sale.

The gallery is “semi-permanent” — it’s donated to the Alliance by landlord Vornado/Charles E. Smith, with the hope that “activating” the otherwise vacant space will benefit other merchants in the underground shopping center. The Alliance is expected to remain in the space until Vornado finds a tenant interested in leasing it.

Arlington Arts Alliance co-director Sandi Parker said that one thing that will make the Northern Virginia Arts Center unique is its focus on purely local artists — mostly from Arlington but also from Falls Church and Alexandria. That contrasts, she said, with other local arts venues like Artisphere in Rosslyn and the Arlington Arts Center in Virginia Square, both of which often display works from out of town artists.

The Alliance, which first formed in 2000, has previously set up shop in vacant and partially-occupied storefronts along Lee Highway, in North Arlington. In each case, eventually they had to move. This time around, the group looked south.

“We reached out to the Crystal City [Business Improvement District] when we were in search of a new home, and they helped us design a fantastic plan,” said Arlington Artists Alliance President Bryan Jernigan. “We look forward to working with our new neighbors to bring a welcoming and unique artistic experience to the area.”

The Alliance says they will continue to maintain a small exhibit at Cassatt’s restaurant at 4536 Lee Highway.

Last night artists, art patrons, and a few media-types gathered to celebrate the improved interior spaces at the Arlington Arts Center. Sparkling wine flowed and bite-sized chicken pot pies were devoured as attendees gazed at the new art on the walls and, occasionally, at the center’s brand new flooring.

The RSVP-only “Art/Space/Design” event was sponsored by DC Magazine and also featured a DJ, a couple of short speeches and a raffle. The rainy weather didn’t seem to hurt attendance, but it did result in an unintentionally avant-garde heap of umbrellas at the building’s entrance.

In other news, AAC is currently offering a steeply discounted membership via Living Social.

Dozens of people turned out for the grand opening of a new art, jewelry and home decor gallery near Ballston.

Covet, as it is called, is located at 5140 Wilson Blvd, just west of Ballston, in the top floor of a small house that was formerly the home of a State Farm insurance agency. The store is co-owned by Sabrina Cabada and Autumn Clayton.

Guests consumed catered wine and small appetizers while perusing Covet’s curated and sometimes quirky artisan offerings. Much of the art for sale is produced by local artists, although national artists are also showcased.

For those who couldn’t stand the shoulder-to-shoulder claustrophobia in the tiny showroom, the boutique’s parking lot provided a welcome refuge for conversation and mingling.

The DC Slices pizza truck provided fresh slices to people whose hunger went beyond finger food. It was the first publicly-announced trek into Virginia for the DC Slices crew, who are licensed to operate as a street vendor in the District but not in Arlington (private property is fair game, however).