Updated at 10:30 p.m. — The person who was barricaded inside an Arlington Heights home has been taken into custody, police say.

Earlier: Two streets north of Columbia Pike, in the Arlington Heights neighborhood, are blocked due to a reported barricade situation.

A person reportedly suffering from a mental health issue is inside a house on the 300 block of S. Fillmore Street and refusing to come out. Fillmore, an arterial street between the Pike and Route 50, is blocked by police south of 2nd Street S. as a result, while parts of 2nd Street are also blocked.

Arlington County police have established a command post on 7th Street S., near the Montessori Public School of Arlington. That street is blocked as well, west of S. Walter Reed Drive.

The incident started before noon and as of 3 p.m. is still ongoing. Both police and fire personnel are on scene, as negotiators try to coax the person out peacefully.

Police, meanwhile, are assisting students in the neighborhood as schools — including Thomas Jefferson Middle School and Fleet Elementary — are let out for the day.

The ACPD will be assisting students who live in the vicinity of S. Fillmore and S. 2nd St. There is no ongoing threat to either school community.

Police continue to work towards resolving the incident. Be advised the following road closures are in place:

For the second time in three days, a food delivery driver was robbed last week by a knife-wielding man in Westover. This time, however, an arrest was made.

The first incident, as previously reported, happened last Tuesday around noon, on the 5800 block of Washington Blvd in Westover.

“The victim was delivering food items to the suspect’s residence when the suspect opened the door and allegedly produced a knife and demanded that the victim leave the items,” an Arlington County Police Department crime report said. “The victim placed the items on the ground and left the scene before contacting dispatch. Warrants were obtained for the suspect. The investigation is ongoing.”

The second incident happened Thursday around dinner time, in much the same manner. From ACPD:

ROBBERY, 2021-12300151, 5800 block of Washington Boulevard. At approximately 6:40 p.m. on December 30, police were dispatched to the report of an armed robbery. Upon arrival, it was determined that the victim was delivering food items to the suspect’s residence when the suspect opened the door and allegedly produced a box cutter and demanded that the victim leave the items. The victim placed the items down, exited the building and contacted police. Officers obtained warrants for Robbery and Defrauding a Restaurant for [The suspect], 36, of Arlington, VA.

It was not until Sunday, however, that officers went to arrest the man. A barricade situation and attempt to flee from police ensued.

“When officers attempted to serve the warrants at the suspect’s residence on January 2, he barricaded himself inside the apartment before attempting to flee out of a second story window,” said the crime report. “He was taken into custody and transported to an area hospital for treatment of non-life threatening injuries.” 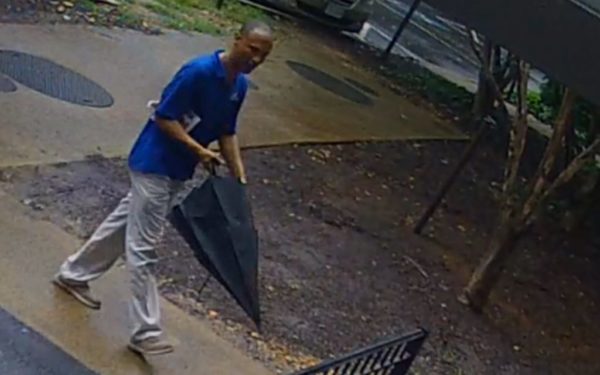 A man suspected of raping a woman in Arlington has been taken into custody after a 16-hour barricade situation in D.C.

Arlington County Police say Salodus Zeloter Hicks, 60, barricaded himself inside a home on the 3300 block of Mt. Pleasant Street NW after Arlington officers arrived to execute a search and arrest warrant last night (Wednesday). He was taken into custody around 1 p.m. today with the assistance of D.C. police and the FBI.

Hicks is facing charges of forcible rape and strangulation in connection with the Sept. 17 sexual assault of a woman in an apartment building on the 5500 block of Columbia Pike. Police say Hicks, who was caught on surveillance video, met the victim after responding to an online ad.

“During the arranged service, the suspect physically assaulted and raped the victim,” police said in a press release. “Following the assault, the suspect fled the scene on foot.”

Police were vague about the exact nature of the advertisement in order to protect the victim’s identity.

(Updated at 4:50 p.m.) Arlington police have arrested a man after he barricaded himself inside an apartment in Shirlington while attempting to evade arrest.

Police were called to the 2700 block of S. Arlington Mill Drive, adjacent to the Village at Shirlington Shopping Center and the Arlington Trades Center, this afternoon (Thursday).

Officers were seeking 31-year-old Brian Covarrubias out of Alexandria, and managed to arrest him following an hour-long standoff, according to police spokeswoman Ashley Savage.

POLICE ACTIVITY: ACPD is on scene of a wanted subject barricaded in a residence in the 2700 block of S. Arlington Mill Drive. Police remain on scene investigating. Public is asked to avoid the area.

Police briefly had close off access to the area, but have since opened things back up.

Updated 4:20 p.m. — Arlington police spokeswoman Ashley Savage said just after 4 p.m. that the suspect had been safely taken into custody.

Police closed Patrick Henry Drive and had officers posted in cruisers blocking the entrance to the apartment complex. Meanwhile, SWAT officers carrying rifles patrolled the perimeter of a building and the department’s armored vehicle was on scene.

Savage said the SWAT team was called in out of an “abundance of caution,” given the highly populated apartment complexes in the area and to ensure the safety of children getting off school buses. She said that despite the heavy police presence, the arrest warrant was a “routine” serving and that there is no threat to the public.

As of 3:35 p.m., officers had still not been able to make contact with the wanted individual, according to scanner traffic, and pedestrian and school bus traffic was being rerouted in certain areas.

Arlington County Police are on scene of a possible barricade situation in the Douglas Park neighborhood, just south of Columbia Pike.

Police have blocked off part of 16th Street S., between Glebe Road and S. Monroe Street.

“Lots of police cars and a cop on a loudspeaker that keeps asking for a guy to come to the door,” an anonymous tipster told ARLnow.com just before 7 p.m. “[They’re saying] we’re not going anywhere… just come out.”

“ACPD is working to have a wanted subject safely exit a residence,” said police department spokeswoman Ashley Savage. “There is no larger threat to community.”

Update at 8:50 p.m. — “The suspect has safely been taken into police custody,” Savage said. “Police remain on scene investigating.”

(Updated at 12:15 p.m.) A portion of road in Pentagon City is being shut down due to a police situation.

Police are shutting down 12th Street S. between Army Navy Drive and S. Eads Street, near the Lenox Club and the Point at Pentagon City apartments.

Initial reports suggest that there is a man on one of the apartment balconies who is being uncooperative with police.

The incident started as a medical dispatch for a hand injury, possibly from the man punching a window or a glass door.

Police are currently trying to establish contact with the man, who is reported to have a history of mental health issues. Firefighters and medics are staging at the scene.

(Updated on 9/12/14) A man suspected of a knifepoint robbery on Columbia Pike was taken into custody early this morning (Wednesday) after police say he evaded arrest and barricaded himself in his girlfriend’s apartment.

Mora Long, a  26-year-old Sterling resident, was captured by SWAT team members and charged with assault on a police officer. Robbery charges are pending.

Arlington County Police say a man fitting Long’s description robbed a store on the 5000 block of Columbia Pike around 2:00 p.m. on Friday. Despite a search, police were not able to locate him after he fled.

“A subject brandished a knife and stole cash from a register in a store in Columbia Pike Plaza,” according to the police report. “The subject fled through a rear door.”

Witnesses tell ARLnow.com that police used a loudspeaker in an effort to get Long to answer the phone and lure him out of the apartment. When that didn’t work, shortly after 2:00 a.m., SWAT team members entered the apartment and were able to take him  into custody without further incident, Sternbeck said.

Update at 5:05 p.m. — The barricade situation has ended peacefully.

Earlier: A man who may be suicidal has barricaded himself in his Courthouse townhouse, leading to a standoff with police.

The incident started between 3:00 and 4:00 this afternoon when the man’s girlfriend told police that he made remarks suggesting he may be contemplating suicide. Police responded to the scene and tried to get the man to come out of the house. Reached by phone, he told police that they’d “have to come get him,” according to scanner traffic.

Police backed off and have surrounded the townhouse complex, which is located across the street from the Courtland Towers apartment building. At one point, the man reportedly ran out of the house and then ran back in when confronted by officers. Police negotiators are now trying to talk the man out of the house again.

N. Wayne Street is closed to vehicle and pedestrian traffic between 13th Street and the Fairfax Drive pedestrian path as a result of the standoff. Residents of the townhouse complex are so far not being allowed back in their homes.

Update at 7:50 p.m. — Officers entered the apartment and found a 37-year-old man dead from a self-inflicted gunshot wound to the head, according to police. A Chihuahua that was in the apartment has been turned over to animal control. Units are clearing the scene.

Earlier: Police have surrounded an apartment building on S. Glebe Road, near Shirlington, after officers heard a gunshot from one of the apartments.

Shortly before 4:00 p.m., officers responded to the Twenty400 building (2400 24th Road S.) to check on the welfare of a man who had not shown up for work for several days. Upon making entry into the apartment, officers heard a gunshot, according to Arlington County Police Department spokesman Dustin Sternbeck. They immediately backed out of the apartment and called for additional resources.

The apartment complex has been at least partially evacuated. Arlington’s SWAT team and bomb squad are now on the scene, preparing to use a robot to look inside the apartment, Sternbeck said. Police negotiators are also on scene. They’re not sure whether this might be a case of a suicide, or a subject who’s barricaded in the apartment.

“We don’t know what we have inside at this time,” said Sternbeck.

Police and bomb squad units have staged around apartment building, blocking at least one lane on S. Glebe Road and causing some traffic backups. Drivers should expect delays in the area.

Police have identified the suspect in this morning’s standoff in Douglas Park as 58-year-old Thomas Amshey.

Amshey is being held without bond at the Arlington County Detention Center. He has been charged with assault, brandishing a firearm and obstruction of justice.

Amshey surrendered to police at 11:20 this morning, following a 16-hour standoff that involved dozens of police officers and culminated with SWAT team members launching tear grenade cannisters into Amshey’s home.

See the police press release on the incident, after the jump.