The recently-opened Taco Rock in Rosslyn is hosting a “Flammin Hot Poppers Challenge” later this month.

Participants will eat as many jalapeño pepper poppers as they can in 10 minutes, without consuming any other food or beverage, a press release said. The winner will take home the Taco Rock Title Belt and a $100 cash prize. Those who come in second and third place will win a medal and a Taco Rock gift card.

“Each contestant will be served up a plate of jalapeño pepper poppers,” said the press release. “They must eat as many flaming hot poppers as they can in ten minutes, one popper at a time, to within one quarter inch of the jalapeño cap.”

Entry to the competition is $10. The event will be free for spectators.

Bayou Bakery, Coffee Bar & Eatery in Courthouse will host a doughnut and beignet eating contest Sunday to coincide with the NFL game between the Washington Redskins and New Orleans Saints.

Nine participants will compete at halftime of the game, which kicks off at 1 p.m. on November 19, in the “Beignet and Brown-Butter Doughnut Eating Contest.”

Bayou chef and New Orleans native David Guas will be putting on the competition alongside District Doughnut chef Christine Schaefer.

Competitors will be asked to take on 10 beignets — a pastry made from deep-fried choux pastry — and 10 doughnuts each, and the one to get through all 20 the quickest will win $150 cash.

Anyone wishing to compete should arrive by 12:30 p.m. Admission is free, and the contest is free. Bayou Bakery is located at 1515 N. Courthouse Road.

More from a press release, after the jump.

END_OF_DOCUMENT_TOKEN_TO_BE_REPLACED 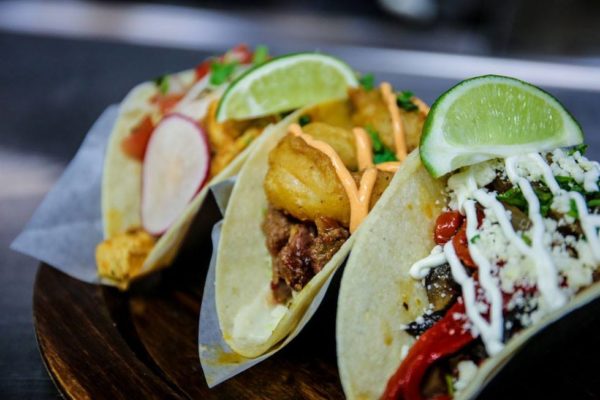 It will feature up to 100 contestants trying to eat as many chicken and beef tacos as they can in one minute. After 10 preliminary heats, each with 10 competitors, the winner of each heat will advance to a preliminary round in which the first person to eat 10 tacos with varying levels of spiciness will be crowned the “Taco King of Arlington.”

The cost of entry is $20. Registration is available online. Spectators can attend for free.

To help celebrate Mexican Independence Day and its own 15 year anniversary, Guajillo in Rosslyn will be giving customers the chance to scarf down a burrito the size of a small newborn baby.

The Mexican restaurant in the Colonial Village Shopping Center (1727 Wilson Blvd) will hold its annual burrito eating contest this coming Saturday, Sept. 19, at 4 p.m. Up to six contestants will attempt to eat a 16-inch, seven-pound burrito called El Cachudo for a chance to win a future dinner for two, said Guajillo spokeswoman Joahna Hernandez.

“El Cachudo is a 16-inch long burrito made with flour tortilla, filled with Mexican rice, refried pinto beans, Oaxaca cheese, pork carnitas, shredded beef, shredded chicken, lightly battered tilapia and most importantly, voodoo salsa made with a blend of fresh habaneros and garlic. It is served with pico de gallo and sour cream on the side,” Hernandez said.

The current record to beat is 20 minutes, which was set by an 18-year-old named Ian, she said. Guajillo co-owner Rolando Juarez started the contest in 2009 and named the burrito El Cachudo, which is a slang word for devil in Spanish, Hernandez said.

In addition to its large size, El Cachudo also has a spicy kick due to the homemade voodoo habanero salsa.

“As for the spicy level, you only need to pour a few drops [of the salsa] on a taco to give it a spicy kick; a little goes a long way!” Hernandez said in an email. “As you may know, an habanero chiles are even hotter than thai peppers and serranos.”

Anyone brave enough to sign up for the burrito eating contest can call 703-807-0840 or email [email protected] for more information.

Guajillo will also be holding specials starting today through Sept. 19 in honor of the Mexican holiday and its anniversary. The restaurant will serve $15 El Taconayo, a build-your-own taco meal, $15 tequila and Mezcal flights and $4 Coronas and Pacificos today. On Saturday, the restaurant will serve brunch starting at 11:30 a.m. with $5 spicy margaritas, according to a press release.

The full press release, after the jump.

END_OF_DOCUMENT_TOKEN_TO_BE_REPLACED 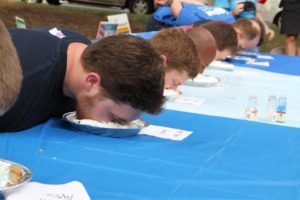 This year’s event, which was attended by dozens of local Democrats and many of Arlington’s elected officials, included a pie-eating contest.

A number of local Democratic notables participated in a eating contest, which challenged competitors to finish a pie as quickly as possible, without using their hands. Rep. Moran’s son, Patrick, won a decisive victory, followed by Paul Holland in second place and Ben Tribbett in third place.

A panel of judges chose Sheriff Beth Arthur’s “Jailhouse Chili” as the best of the 14 chili entries, but a “popular vote” of attendees resulted in Commissioner of Revenue Ingrid Morroy’s “Taxes Chili with a Caribbean Twist” being named the “top of the ticket.” Among the runners-up in the popular vote were Del. Patrick Hope’s “Hope for the Best” chili, the Rep. Jim Moran “Victory 2012” chili, and Arlington School Board candidate Noah Simon’s “School House Rock” chili.