The area around the John Robinson, Jr. Town Square has a public urination problem.

The square used to be a grassy area with trees, until it was closed off for the construction of the neighborhood hub. With nowhere else to go, people began relieving themselves on the sidewalk along 24th Street S., we’re told.

Formerly Nauck Town Square, before it was renamed after a long-time Green Valley civic leader, the new park opened this spring. Since then, more neighbors have encountered the issue while enjoying the square or participating in community programming there.

“We have our neighbors saying, ‘I’ve had to walk my kid around urine as it’s flowing,’ or ‘It is on sidewalks,'” Sarah Kirwin said. “[People are] peeing on a person’s house, regularly. They’re peeing against The Shelton [an apartment building]. I see it all the time. Kids see it.”

Kirwin says the people who have nowhere to go also would like a restroom and have encouraged her to advocate for one.

“I do talk to the people who are peeing,” she said. “We all agree that that’s a need. This is something on which we are unified.”

This is not the first time a problem like this has cropped up at a county park. In 2014, such a situation spawned the memorable ARLnow headline, “Peeing and Pooping in Penrose Park Peeves Parents.”

Kirwin asked the Arlington County Board to do something about the latest lacking lavatory during the public comment period of last Saturday’s Board meeting. County Manager Mark Schwartz and County Board member Takis Karantonis both said the Dept. of Parks and Recreation is aware of the problem and working on solutions.

A staff member from DPR “has been out talking to members of the community about a location for a portable restroom,” Schwartz said. “We had some other ideas for a permanent facility that will take a lot longer to realize… We’re aware of the problem and know it needs to be resolved.”

While the department has not received any formal complaints about public urination, staff will attend the February meeting of the Green Valley Civic Association to “discuss potential options for a portable restroom and to gain consensus on the next steps,” DPR later told ARLnow.

While there is currently no funding allocated for a permanent restroom, it could be included in future budget processes if there is “community interest and available funding,” she said.

Holland said there’s no bathroom currently because “there was no consensus on the need for a permanent restroom” during the park’s planning process.

END_OF_DOCUMENT_TOKEN_TO_BE_REPLACED

(Updated 2:25 p.m.) The issues with nannies, childcare workers and parents letting children urinate and defecate at Penrose Park (2200 6th Street S.) were caught on camera by FOX 5 D.C. yesterday, just minutes after the news crew arrived at the scene.

“Our FOX 5 crew had only been at Penrose Park for a few minutes when we saw a girl going to the bathroom behind a tree. And then a little boy did too,” reporter Alexandra Limon wrote. “We purposely blurred the video and did not tape the girl behind the tree. But it appeared from the kids and nanny’s reaction that this was a normal thing for them.”

Limon’s account corroborates what many parents have said, both in the comments of ARLnow.com’s initial story and in an anonymous interview. FOX 5 also interviewed an ARLnow reporter during its morning show on the topic.

“This has been going on for a very long time at the park,” one parent said, in a phone conversation after the initial story was published. “The worst I saw was one parent dropping the kid’s underpants inside the fenced-in area” where the playground is.

Arlington Parks and Recreation spokeswoman Susan Kalish told ARLnow.com in an email this morning that allowing children to pee or poop in the park is a violation, with the first offense resulting in a warning. Repeat offenders can be banned from a park, she said, but the parks department doesn’t “have records of anyone being banned.”

“In the past Penrose was checked by our Rovers and Rangers throughout the week,” Kalish said. “We are beefing that up now but we think that with all the attention to this, whomever was doing it before will stop and others won’t consider it. We’ve found that even homeless people are pretty embarrassed when they get caught. Defecating in public is not a first option for anyone.” 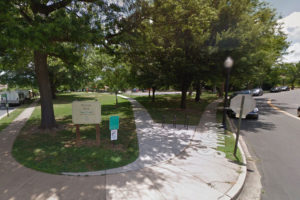 Children are urinating and defecating in public at Penrose Park (2200 6th Street S.), according to neighborhood residents.

Terri Armao, the chair of the Green Committee for the Penrose Neighborhood Association, sent a letter to the civic association saying neighbors have called her to complain that “childcare workers or nannies [are] allowing toddlers to pee and poop” by the tree line on the edge of the park.

In an email to ARLnow.com, Armao said the excrement is a health and environmental hazard, adding that if it continues it might put residents at risk for cholera.

“We all understand an occasional accident but what was described to me was routine and by many nannies/kids,” Armao said. “I walk my dog there and pick-up after the dog. So I would expect the same courtesy. In addition, there are many areas in the park natural area, where this is happening that have standing water after rain. This to me is a health hazard in the making.”

Below is the letter Armao sent to the civic association:

This morning I heard from two people who have witnessed childcare workers or nannies allowing toddlers to pee and poop in Penrose Park in the tree line of the natural area. This is reported to be an ongoing and frequent problem.

Parents if you are employing nannies please tell them not to allow this. Our parks are not toilets. Please use diapers or go home if this need arises.

I spoke with a couple of parents who also use the park and they were as surprised and disgusted as I am. This is a health hazard. I have notified the county but please call Park Manager Kurt Louis at 703-228-7754 or the police if you see this happening.

Dog walkers this goes for you too. If your dog roams into this area the dog poop still needs to be picked up. A tributary of Long Branch stream runs directly under the park, this is our drinking water.

The Arlington Virginia Network (the county’s cable channel) has a look at your wastewater treatment plant. Warning: not for the squeamish.