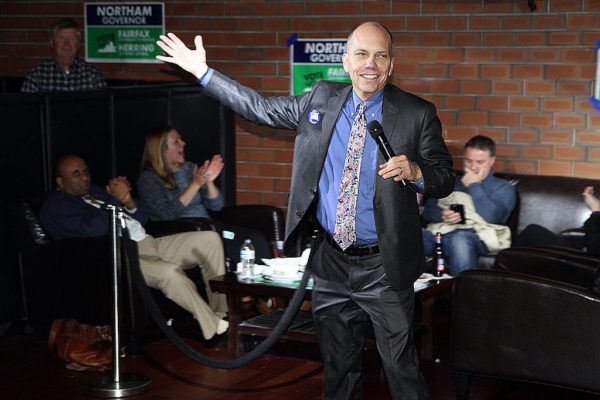 Uncharacteristically, Arlington County Board Vice Chair Erik Gutshall did not attend this past month’s board meetings.

His absence, the reason for the five-member Board’s 4-0 vote on the county tax rate advertisement on Tuesday, is due to a serious health condition.

Gutshall’s wife broke the “heartbreakingly difficult” news on his Facebook account Sunday night, telling friends that he is “hospitalized and being treated for a brain tumor.”

“We hope that you will keep him in your thoughts and prayers as he goes through treatment over the coming weeks,” Renee Gutshall wrote. “Words cannot express how much your friendship, support and love mean to me, our children and Erik right now.”

“Our friend and colleague, Erik Gutshall, is dealing with a health crisis,” Arlington County Board Chair Libby Garvey said in a brief statement Monday morning. “We miss him, and our thoughts are with him and his family.”

At the Board’s annual organizational meeting in January, Gutshall spoke of the progress the County has made in just the past few years on issues like housing, sustainability, and economic development. The county had “leveled up” with the arrival of Amazon, he said.

“Today is proof that even a distant future will one day come to pass,” Gutshall said. “I’m honored to work on this next level with my amazing colleagues, talented Manager and his brilliant staff, and the passionate citizens who I know care about this community as much as each of us.”

In addition to serving on the County Board, Gutshall is the president and owner of residential maintenance company Clarendon Home Services. 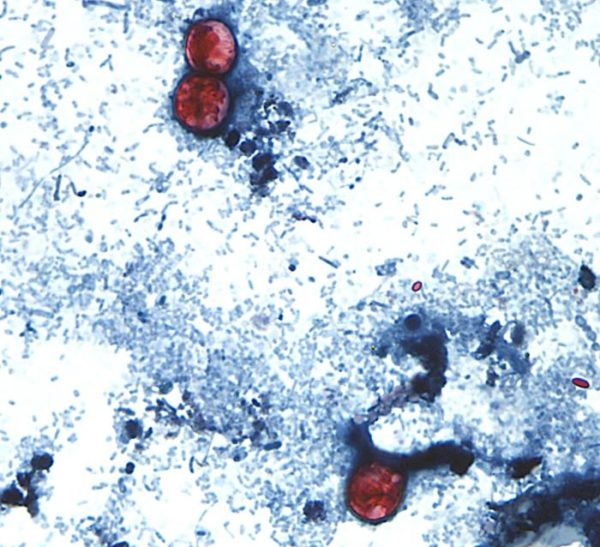 Arlington and Northern Virginia are experiencing a possible outbreak of cases from a particular foodborne illness.

Dozens people in the region are suspected of having contracted a gastrointestinal illness called Cyclosporiasis, according to a spokeswoman for the Virginia Department of Health. The outbreak involves “two large businesses” where more than 40 people were sickened, possibly with Cyclosporiasis, as well as 15 confirmed cases of the disease, officials say.

“A food or water source of this outbreak has not yet been identified, and the investigation is ongoing,” said the state health department.

“Cyclosporiasis is an intestinal illness caused by a microscopic parasite,” the department noted in a press release today (Tuesday.) “People can become infected by consuming food or water contaminated with feces or stool that contains the parasite.”

The 15 confirmed cases of people infected with Cyclospora since mid-June compares to eight cases in Northern Virginia by this time last year.

“Arlington County has… experienced an increase in cases of illness due to Cyclospora,” confirmed epidemiologist Colleen Ryan Smith of Arlington’s Department of Human Services.

“The increase in Arlington… has contributed to the increase in cases noted for Northern Virginia,” added Smith, who said that “specific counts of cases by locality [are] not possible due to patient privacy and confidentiality considerations.”

Officials said they could also not identify the “two large businesses” where dozens were sickened.

Symptoms can begin one week after exposure to the parasite, and typically include explosive diarrhea, stomach cramps, nausea, aching muscles, and a low-grade fever. Symptoms can last days or a month for some, but others can be a carrier of the parasite and experience no symptoms.

Those afflicted can only be diagnosed by a lab test ordered by a doctor. 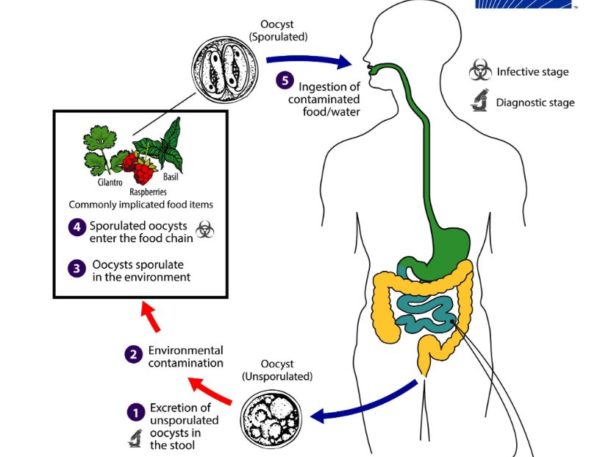 Health officials have also reported 90 cases of Cyclospora in New York City since January, and over 100 cases in Massachusetts since May. In both areas, the number of cases is approximately three times the normal number officials usually see in a year, and the cause is not yet known.

Officials in all three locales say they are still investigating the cause of the outbreak. Previous outbreaks were linked to contaminated produce.

END_OF_DOCUMENT_TOKEN_TO_BE_REPLACED 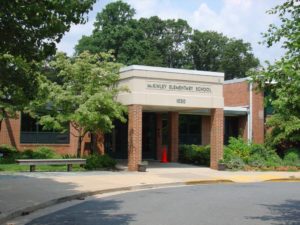 More than 100 students were out sick today (Thursday) at McKinley Elementary School after a stomach bug swept through campus.

An Arlington Public Schools spokesman said 135 of the school’s 800 students were out, after about 85 were absent yesterday (Wednesday).

The spokesman said that while it sounded like a “typical [stomach] bug that makes its way around this time of year,” he said he could not be sure that all the absences were related to it.

Multiple anonymous tipsters reported the spread of the illness through the school at 1030 N. McKinley Road in Madison Manor.

The School Health Bureau within the county’s Department of Health sent a letter to parents warning of an “increase in reported symptoms of gastrointestinal illness,” and urging parents to make sure children wash their hands and stay home if they develop vomiting or diarrhea.

Parents throughout APS can expect to receive a letter soon about winter illnesses in the community, which the spokesman said is “typically sent each December to our families as a reminder.”

The School Health Bureau’s letter to McKinley parents is after the jump.

END_OF_DOCUMENT_TOKEN_TO_BE_REPLACED 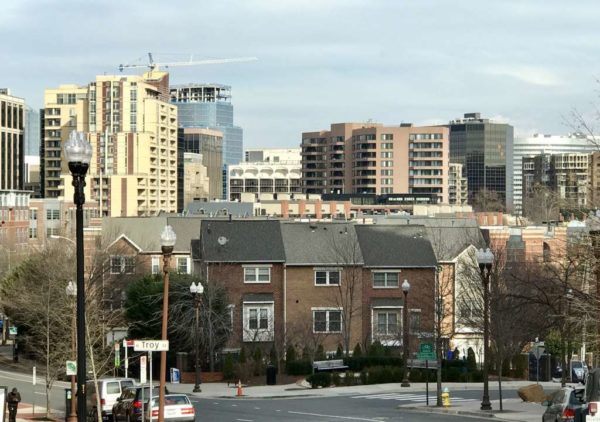 Norovirus Outbreak at School — More than 80 students at Oakridge Elementary in south Arlington are out sick as a result of a suspected norovirus outbreak. The virus causes symptoms like “stomach aches, fever, vomiting and, in some cases, diarrhea.” [NBC Washington]

Sign Controversy at Yorktown — Some conservatives are upset that teachers at Yorktown High School are being allowed to hang “politically suggestive” signs in their classrooms. The signs read: “Patriots Know: Facts are not political. Diversity strengthens us. Science is real. Women’s rights are human rights. Justice is for all. We’re all immigrants. Kindness is everything.” [Daily Caller]

Female UAE Hockey Player Visits Caps — Fatima Al Ali, a hockey player and coach from United Arab Emirates, has been visiting with the Washington Capitals this week as part of the NHL’s “Hockey Is For Everyone month.” The visit has included taking the ice at the Caps practice facility in Ballston and dropping the puck at last night’s game at Verizon Center. [Fox 5, Al-Arabiya]

Levine, Favola Advance Rape Kit Bill — Updated at 9:40 a.m. — Legislation sponsored by Del. Mark Levine and state Sen. Barbara Favola, which Arlington County Board member Katie Cristol helped to craft, has passed unanimously in the Virginia House of Delegates. The bill calls for police to keep rape kits for a longer period of time even if the victim is not ready to prosecute. [WVTF]

MMA Studio Gives Parents a Night Off — A mixed martial arts gym is not a place that one would usually think of as a babysitting venue, but that’s precisely what Pentagon MMA on Columbia Pike will be Saturday night. The business is hosting a “parents’ night out” event for Valentine’s Day, letting mom or dad “enjoy a worry-free evening with your special someone this Valentine’s Day while your child enjoys a night of structured activities in a supervised environment.” [Pentagon MMA]

(Updated at 4:40 p.m.) Dozens of students at Barcroft Elementary School were sent home from school on Friday with stomach illnesses.

The contagion prompted school officials to cancel after-school activities on Friday, including a PTA-sponsored “Sweetheart Dance.” Students were sent home with a letter on Friday advising parents on how to prevent the spread of gastrointestinal illness.

“This communication is being sent to let you know that Public Health has been receiving an increase in reported symptoms of gastrointestinal illness in members of the Barcroft school community,” the letter reads. “If your child develops vomiting or diarrhea, we recommend that you keep your child home for 24 hours after the symptoms stop before sending your child back to school.”

School will reopen and activities will resume as normal on Wendesday, weather permitting.

School Health Bureau Chief Marian Harmon told ARLnow.com in an email this afternoon that, between Feb. 11 and Feb. 13, 38 students at Barcroft were either sent home or stayed home with gastrointestinal issues.

“Kids were lying around the office waiting to be picked up” on Friday, an ARLnow.com tipster wrote in an email.

Because Arlington Public Schools offices were closed due to the snow today, officials could not confirm the number of cases reported at Barcroft. In the letter, APS said all shared surfaces in the school are disinfected “each day and after any illnesses at the school.”

After the jump, the letter APS sent home with Barcroft students. END_OF_DOCUMENT_TOKEN_TO_BE_REPLACED 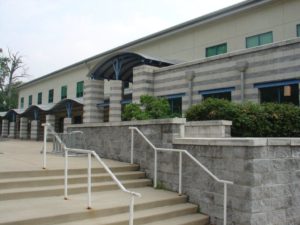 At least 20 students went to the school clinic Friday because of nausea or vomiting, according to Arlington Dept. of Human Services spokesman Kurt Larrick.

Officials say they’re investigating whether the illness was caused by norovirus, and whether the virus might have spread due to a bathroom that was not cleaned properly.

Norovirus Outbreak at Nottingham Elementary — Dozens of students at Nottingham Elementary School have been sickened in what is believed to be an outbreak of norovirus. The contagious stomach illness causes serious nausea and vomiting. So far, Arlington Public Schools officials have not responded to a request for more information from ARLnow.com. [WJLA]

County Board Not Interested in Meals Tax Changes — In response to a speaker at Saturday’s Arlington County Board meeting who was critical of the county’s 4 percent meals tax, County Board members said they’re not inclined to make any changes to the tax. The meals tax is levied on restaurant bills and on the purchase of prepared meals from grocery stores, on top of the state’s 5 percent sales tax. [Sun Gazette]

Arlington Org Targeted By IRS — The Clarendon-based Leadership Institute, a conservative training organization, says it was among the conservative groups targeted for audits and extra scrutiny by the Internal Revenue Service. [Washington Free Beacon]