Arlington police arrested a man last week after he allegedly ran naked through an East Falls Church neighborhood, breaking into several homes and damaging property along the way.

Officers received reports that Martin tried to break into several homes in the area, and was successful in some cases, and damaged some property. When police tracked Martin down along the 2100 block of N. Westmoreland Street, he then ran into a home “where he locked himself inside a bathroom with a male victim,” police said.

The man inside the bathroom was able to unlock the door, allowing officers to arrest Martin, who was then transported to the Virginia Hospital Center for a medical evaluation. Police charged him with two counts of burglary and destruction of property, and one count each of attempted burglary and abduction.

The incident was not connected to another instance of a naked man running near Claremont Immersion School earlier that same day, according to police spokeswoman Ashley Savage.

Martin is set for a Nov. 15 hearing in Arlington General District Court on those charges.

BURGLARY, 2018-10100050, 6700 block of 19TH Road N. At approximately 5:35 a.m. on October 10, police were dispatched to the report of suspicious circumstances. Upon arrival, it was determined that the victim heard noise originating from the backyard and upon investigating, located damaged property. As officers canvased the neighborhood, they began receiving reports of a naked man observed in the area. Officers located the suspect in the 2100 block of N. Westmoreland Street and commanded him to stop. The suspect fled on foot into a residence where he locked himself inside a bathroom with a male victim. The male victim was unharmed and able to unlock the door at which time officers took the suspect into custody without further incident. As the investigation continued, officers located additional victims and determined the suspect had allegedly attempted or successfully gained entry into residence as well as locations where property was damaged. The suspect was transported to Virginia Hospital Center for medical evaluation. With the assistance of the Federal Bureau of Investigation, the suspect was identified as Kahlil Martin, 25, of No Fixed Address. He was charged with Burglary (x2), Attempted Burglary, Abduction and Destruction of Property (x2). 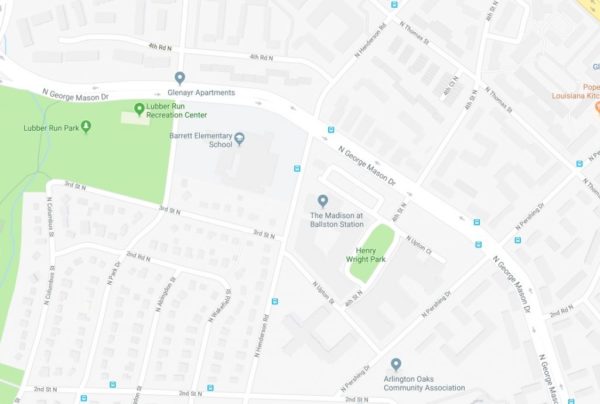 A nude woman was found wandering around a building lobby on the 4400 block of 4th Street N. in the Buckingham neighborhood this morning.

Arlington County Police declined to comment further than to confirm that the woman was believed to be suffering from mental health issues and has been transferred to an area hospital for treatment.