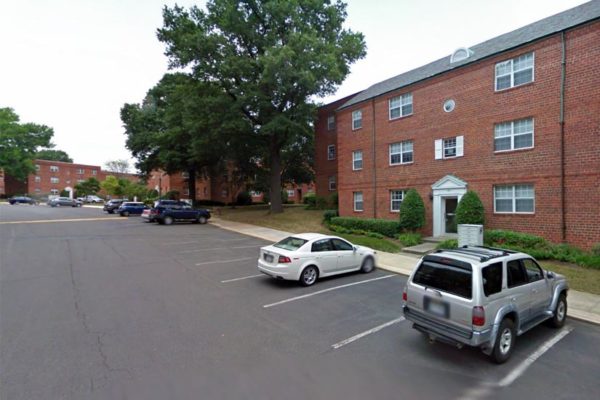 An apartment complex in Lyon Park recently issued a warning to tenants saying the only place for child’s play is the playground.

A note provided to ARLnow, addressed to the residents of Washington & Lee Apartments (2200 2nd Street N.), said “children are to be playing in the playground and in no other areas,” in bolded, italicized and underlined letters.

They cannot play in “common areas which include… on the grass or trees,” only the area designated as the playground, according to the note.

It’s one of two notes ARLnow has obtained indicating that some apartment communities are cracking down on play in common areas in response to an uptick in complaints from other tenants about noise and property damage.

The Washington & Lee note was a first for Nicole Merlene, a Tenant-Landlord Commission member and ARLnow opinion columnist. She tells ARLnow it describes a potentially discriminatory practice and reveals the need for Arlington to offer mediation services between tenants and landlords.

“Since I have been on the commission we have not received a complaint of this kind where there is potentially discrimination based on age for activities,” she said.

The note responds to an increase in complaints from tenants about damaged cars from kids playing in the parking lot, a property manager for the complex told ARLnow. In a phone interview, the manager said five complaints have come in the last few months of kids hitting cars with rocks or scratching them up with scooters and bikes. As for the trees and grass, the manager said kids were breaking limbs and digging holes.

“It’s just gotten to the point where the damage and complaints were so bad I’d have to take action,” the manager said. “Because of COVID… [parents] didn’t have adequate care and the children were just left at home on their own.”

The note also bans sidewalk chalk because kids drew on the brick walls, according to the manager. The note said “stricter action will be taken” if the problems continue. In 2014, the same apartments launched a campaign against tenants feeding squirrels.

Merlene said that these kinds of landlord-tenant disputes could be resolved through an out-of-court mediation service — one that Arlington has not had since it was defunded a few years ago, she said.

“This type of out of court service requires both parties to willfully participate, but after conversations with both Alexandria and Fairfax, it is by and large extremely successful at finding a solution when a tenant is the one bringing a grievance,” she said. “The Tenant-Landlord Commission is in the process of looking into ways in which other jurisdictions have successfully provided this service and will recommend a system that works for our community for the Board’s consideration.”

Asked to evaluate the letter, she said commission members are not lawyers or trained in discrimination policy, so commissioners avoid determining if something is illegal. Instead, those with complaints are referred to the county’s Office of Human Rights.

But taking apartmentment owners to court, while a recourse for Arlington tenants, rarely happens.

“Reasons range from fear of potentially losing the case against a big landlord’s lawyer and having to pay their attorney fees, immigration status, cultural barriers, and various other hurdles,” she said.

Complaints of noise and kids’ behavior have also registered with the management office at Union on Queen (1515 N. Queen Street), near Rosslyn.

Tenants received a “friendly reminder” that no residents can hang out in or around the courtyard fountain. It told parents they are responsible if their children play there, according to a screenshot shared with ARLnow.

“Thus far we have seen trash left in the courtyard and in the fountain, and we’ve seen children playing in the courtyard [spraying] water on other resident’s [sic] windows,” the letter said.

The Union on Queen reminder also noted that the office “has received numerous complaints about increased noise levels due to groups being in the courtyard and around the courtyard’s fountain.”

“We will unfortunately have to issue lease violations should the issue persist,” the note said. “Again, we don’t want them to hurt themselves or others in the building. We want all of our residents to be safe and comfortable.”

With summer around the corner, Arlington County has shared an update regarding four newly renovated parks.

The parks have either recently completed renovations or are planned to open soon.

The Fairlington Park playground opened in March. The project included a complete redesign and reconstruction of the playground, exercise equipment, park trail and more. The renovated play area offers options for different age groups and exercise equipment for all ages.

While there has been no ribbon-cutting yet at McCoy Park, it is fully accessible to the public. Enhancements at the park, which is wedged between Lee Highway and I-66, include a realigned sidewalk and a seating deck with tables and chairs.

Dawson Terrace Park hasn’t reopened yet, but the Arlington County website says it will be “later this spring.” Plans are for the two small courts at the site to be replaced with a single, lighted court that can be used for basketball, volleyball or other court games. A separate playground area will cater to kids and the park will have have upgraded picnic areas and trail connections. 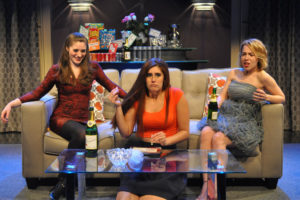 (Updated at 3:00 p.m.) A community theater in South Arlington is showing “Bachelorette” this month, a play with a disclaimer of “adult situations, strong language, sexually suggestive situations, nudity, smoking and depictions of drug and alcohol use.”

Dominion Stage is producing the show, running at Theatre on the Run (3700 S. Four Mile Run Drive) Thursday, Friday and Saturday the next two weeks after opening this past weekend. It’s being billed as “part ‘Bridesmaids, part ‘The Hangover and part ‘Mean Girls’… only the girls are much meaner!” according to a promotional email.

The premise of the show is four friends convene in a hotel suite for a bachelorette party in New York City.

“Fueled by jealousy and resentment, the girls embark on a night of debauchery that goes from playfully wasted to devastatingly destructive,” the email states. “Their old fears, unfulfilled desires and deep bonds with each other transform a prenuptial bender into a night they’ll never forget.”

Tickets are on sale online and at the door for $20. Each show starts at 8:00 p.m. The play was turned into an R-rated moviem “Bachelorette,” starring Kirsten Dunst, Isla Fisher, Lizzy Caplan and Rebel Wilson. It scored a 56 on Rotten Tomates.

A play that sent shockwaves throughout Uganda with the utterance of the phrase “I’m gay” is making its way to Artisphere (1101 Wilson Blvd) this weekend.

A staged reading of “The River and the Mountain” will take place at Artisphere’s Dome Theatre this Saturday, March 23, at 7:30 p.m. The dramatic comedy revolves around the life of a gay factory manager in Uganda who encounters violent reactions from family members and colleagues when he comes out at a party. The free event includes a talk back with playwright Beau Hopkins and U.S. producer/director Sarah Imes Borden.

The play made news in August 2012 when it became the first Ugandan play to have an openly gay character. Homosexuality is illegal in Uganda, as well as 36 other African nations, and punished with lengthy jail terms.

The producer of the play, David Cecil, was arrested last September for offending the Ministry of Ethics in Uganda. The charges were dropped in October due to lack of evidence that the play promoted homosexuality. Last month, however, Cecil was detained again and deported from Uganda. The next day, Uganda’s Parliament began debating a new draft of a national anti-homosexuality bill, often known around the world as the “Kill the Gays Bill.”

The original form of the bill sought the death penalty as punishment for those who are gay. Although Uganda’s Parliament has said that there’s a recommendation to drop the death penalty and instead require life imprisonment for gay individuals, the revised bill with the reported changes has not yet been made available to the public.

One of the original actors in the play when it was first staged in Uganda, Okuyo Joel Atiku Prince, was supposed to join in this weekend’s event at Artisphere, but his travel to the U.S. has been denied by the Ugandan government, according to Artisphere spokeswoman Annalisa Meyer.