Residents of a North Arlington neighborhood say a large house with a huge yard on their quiet cul-de-sac is generating even bigger problems: boisterous parties, underage drinking, fast driving and trash.

“This is worse than an accident waiting to happen; it’s a potential tragedy in the making,” said Darren Trigonoplos, a resident of the Riverwood neighborhood, which borders the George Washington Parkway, during the public comment portion of Saturday’s County Board meeting.

When neighbors call the Arlington County Police Department, he said, the officers who arrive to the house on N. Nelson Street issue citations but do not stop the parties outright. Trigonoplos asked the County Board to set firm conditions on how the house can be used and to ensure the police have the power to bring activities at the house under control.

He also asked the county to make it easier for residents with complaints to figure out where to go to resolve their concerns — especially if their problem falls under the purview of multiple county offices.

It turns out Arlington County staff were already combing through county code to develop an infographic on how to report noise disturbances, County Manager Mark Schwartz said during a County Board meeting yesterday (Tuesday).

“Right now, you’re left to your own devices to navigate the county website,” Schwartz said. “I will tell you, being a homeowner, you get extremely frustrated when it’s midnight and there’s a party and you don’t know what to do.”

Staff worked through four different code sections to draft the infographic, he said.

“You can look on the left-hand column and find whatever’s ruining your day, and then you find out what time of the day and who do you call,” Schwartz said.

But to manage expectations, he said, the go-to for residents is the Arlington County Police Department non-emergency phone line, which may mean a few days between the call and a response by the police or another county enforcement agency.

Board Member Libby Garvey asked if residents can do anything to help their case, such as record the incident with their phone.

According to County Attorney MinhChau Corr, recordings “are not unhelpful,” but the gold standard is law enforcement observing the violation, as videos require verification.

The enforcement issue resurfaced when Board Member Takis Karantonis asked for the inclusion of reports of excessive vehicle noise. Unless police hear the noise and track down the offending car, those complaints are also hard to enforce, Schwartz said.

He acknowledged “it is a big issue and we might want to add that to this list,” but the best means of enforcement will be through automated devices.

Board Vice Chair Christian Dorsey suggested the county revisit the idea of only specifying “nighttime” disturbances in the infographic — though other types of noise complaints were also listed — as more people work from home and work non-traditional hours.

“This is a vestige from a time when it was normative when people went somewhere during the day and wanted quiet enjoyment when they got home,” he said. “It seems silly to have the weight of government to enforce quiet enjoyment of your home only at a time when we think it might be relevant.”

END_OF_DOCUMENT_TOKEN_TO_BE_REPLACED 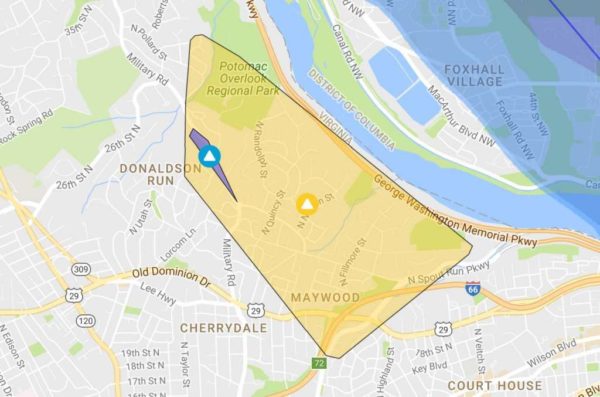 Nearly 600 Dominion customers are without power in the Donaldson Run, Maywood and Riverwood neighborhoods of north Arlington.

Initial reports suggest Dominion crews shut down power to the grid after a tree or a large branch fell on a power line, which started arcing. Those crews are currently working on the lines on the 2600 block of Military Road, according to scanner traffic.

Power crews are keeping busy due to the high winds today. Nearly 2,500 Dominion customers are without power throughout Northern Virginia, though so far no other outages have been reported in Arlington.