For the first time in its decade-long history, the National Chamber Ensemble will play concerts at venues other than Rosslyn’s Spectrum Theatre (1611 N. Kent Street), starting next month.

Arlington Cultural Affairs Division director Michelle Isabelle-Stark said the county’s lease on the theater expired in July, and they took “immediate steps” to help find new spaces in which the group can perform.

So instead of performing at the theater, which it has done since its founding in 2007, the NCE will perform its five 2017-2018 season concerts at the Gunston Arts Center (2700 S. Lang Street) and the Unitarian Universalist Church of Arlington (4444 Arlington Blvd).

The ensemble performs chamber music — classical music composed for a small group of instruments in a more intimate setting.

NCE’s season of concerts begins on Saturday, October 14 at Gunston Arts Center with a program called, “Night in the Garden of Spain” featuring a celebration of Spanish classical music and dance.

“It was hard to find a space comparable to the Spectrum, because the Spectrum is a perfect size for chamber music,” said NCE artistic director Leo Sushansky. “Most of the other auditoriums in Arlington, they’re very large school auditoriums. So the Gunston Arts Center is probably the closest to the Spectrum in size, but it was only available for two concerts.”

The Spectrum Theatre is set to be torn down during the first phase of the Rosslyn Plaza Project along with two apartment buildings and four office buildings.

But Sushansky said while having to play in new venues incurs extra costs from rentals, transporting instruments and the like, it will help them show off their talents to more people.

“I’m hoping it’ll bring us into different neighborhoods, bring attention to a different audience,” he said. “It will help bring about some interesting collaborations.”

But the closure of the Spectrum left Sushansky to bemoan the lack of dedicated performance spaces in Arlington outside of the county’s schools.

“The county has been very supportive all these years, and they continue to be so,” he said. “It’s just there’s a problem in Arlington with not enough performance spaces. There’s really no concert hall in Arlington. The Spectrum was the only one. Now that has gone and all that are left are school auditoriums.”

Isabelle-Stark said that such groups can be creative with their venue choices, as it gives them different environments to perform in and introduces their work to more people.

“As they say when one door closes another one opens,” she said. “[Alternative] venues for performance, such as churches, shopping malls, and airports, to name a few, provide opportunities for performers to stretch creatively and cultivate new audiences.”

Photo No. 1: courtesy photo. Photo No. 3 via Google Maps.

A live national stage show returns to Arlington later this year, and it’s all about motherhood.

Rosslyn’s Spectrum Theatre will welcome Listen To Your Mother on May 7 in the show’s final nationwide tour. It was first produced in 2010 in Madison, Wisc.

The show features live readings about motherhood by 11 local writers and bloggers, but not all the performers are mothers. In fact, director Kate Hood said, variety of experiences is key.

Perhaps one participant talks about their grandmother, or another describes the work of a friend’s mother. It is not just a show for mothers to share their stories of motherhood.

“There’s going to be some things that will make you laugh, stories that are crazy and you’ve never heard before,” Hood said. “But I think we have some pretty powerful moments too. It’s hard to say, because each person has a unique story.”

Hood worked alongside director Stephanie Stearns Dulli — a former actor previously based in Los Angeles — to choose the cast from about 40 people who audition. Both agreed it is very hard to narrow it down to a list of less than a dozen participants.

“Every year, casting feels like separating diamonds from diamonds, and this year was no exception,” Stearns Dulli said. “[One] minute I was spellbound by heartbreak and poignancy and then five minutes later in another audition, I would be laughing so hard my stomach ached.”

After participants are selected, Stearns Dulli leads a full read-through with the entire group, then meets with each person individually to give them tips on how to present and when to pause for laughter or at poignant moments.

Then on the day of the performance, those involved are led onto the stage, told where to sit, then say their first line and last line into the microphone to get a feel for being on stage. That is the closest the group gets to rehearsing their material before the event.

But Hood said audiences react positively to the experience, and feel more involved in what takes place on stage.

“One thing we hear from the audience members that we talk to is that they felt like they weren’t just watching a show, they were experiencing something as a community,” Hood said. “It’s really special. It’s not just going to be entertained, it’s going to bear witness and to feel honored that somebody is letting you into their life.”

Tickets are available for purchase online. 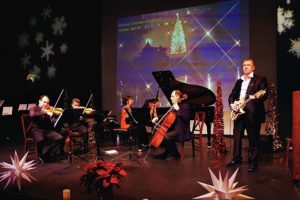 The annual National Chamber Ensemble Holiday Concert will return to the Rosslyn Spectrum Theatre this Saturday for a tradition almost as old as the musical group itself.

This year’s concert is scheduled for this Saturday, Dec. 12 at 7:30 p.m. General admission tickets are available online and cost $17 for students, $33 for adults.

The ensemble was founded nine years ago by Leo Sushansky, who is also the group’s artistic director. The holiday concert has been a part of the performance schedule for eight of those nine years.

“I think it’s one of the most fun events of the season in Rosslyn,” Sushansky said. “It brings together classical masterpieces and holiday favorites in one program, for kids, for families, for everyone.”

This year’s program includes classical music from Beethoven and Chopin, as well as a piece from the overture of Tchaikovsky’s The Nutcracker, a special performance of “Oh, Holy Night,” a Hanukkah medley and Leroy Anderson’s “Sleigh Ride.”

Per tradition, the concert will end with a sing-a-long, led by performer and Washington Life Magazine performing arts columnist Patrick D. McCoy.

During the show, the chamber will also present the first ever Outstanding Young Artist Achievement Award to Avery Gagliano, a 13-year-old pianist and violinist from the metro area. She’ll be featured in a solo and will also play one song with the entire ensemble.

“She’s a prodigy and the winner of many competitions around the world,” Sushansky said about the young artist. “She’s very deserving of this award.”

Sushansky also said audiences can prepare themselves for more engaging experience than they might expect from a holiday concert.

“All our concerts are very interactive,” he said. “Musicians tell stories, jokes, and talk about personal experiences. Yes, you’ll get to hear some great music, but you’ll also get to know the artists.”

Audience members will have another opportunity to interact with the artists after the concert, as they’ll join a reception with wine, cheese and snacks following the show.

“We’re a society of internationally acclaimed musicians from the capital area, and we come together for chamber music,” Sushansky added. “We’re very excited to share this with the Arlington community again this year.”

The National Chamber Ensemble will perform a medley of Jewish songs at Artisphere‘s Rosslyn Spectrum Theatre (1611 N. Kent Street) next month to commemorate the anniversary of a massacre of Jews in Europe.

The NCE’s show, “Jewish Musical Treasures,” will be the first show of the orchestra’s season, and it falls on the 75th anniversary of Kristallnacht. On Saturday, Nov. 9 at 7:30 p.m., they will perform an assortment of music by several Jewish composers.

The NCE is the Spectrum Theatre’s resident ensemble and the show opens its seventh season. It will perform premieres of new pieces, including one based on the musical “Fiddler on the Roof,” as well as compositions by George Gershwin and Leonard Bernstein. Tickets are $30 for adults and $15 for children.

A brief description of Kristallnacht, from the U.S. Holocaust Memorial Museum:

On November 9–10, 1938, the Nazis staged violent pogroms—state sanctioned, anti-Jewish riots—against the Jewish communities of Germany, Austria, and the Sudetenland. These events came to be known as Kristallnacht (commonly translated as “Night of Broken Glass”), a reference to the broken windows of synagogues, Jewish-owned stores, community centers, and homes plundered and destroyed that night. Instigated by the Nazi regime, rioters burned or destroyed 267 synagogues, vandalized or looted 7,500 Jewish businesses, and killed at least 91 Jewish people. They also damaged many Jewish cemeteries, hospitals, schools, and homes as police and fire brigades stood aside.

“The National Chamber Ensemble concert ‘Jewish Musical Treasures’ will note events that should never be forgotten through our concert celebrating the joy of life and creative survival,” the NCE said in a press release. 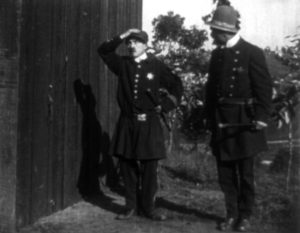 An early Charlie Chaplin film, thought to have been lost to history but recently rediscovered by a collector at a Michigan antiques sale, will be shown here in Arlington for the first time since its 1914 release.

The movie, a silent Keystone Kops film called A Thief Catcher, will be a centerpiece of the 2010 Slapsticon film festival, being held at the Rosslyn Spectrum Theater from July 15-18. The film will be shown at the festival kickoff on Thursday, July 15, at 7:00 p.m.

Chaplin has a two minute cameo as an incompetent cop in the 10-minute flick. He is seen sporting his soon-to-be-trademark mustache for one of the first times.

The film’s unlikely discovery in Michigan and the Arlington debut has caught the attention of historians and movie buffs.

“I only wish I could attend this year’s Slapsticon in Washington, D.C. and see it on a big screen with a first-time audience,” film critic Leonard Maltin wrote on his blog.