First started in March 2020 in response to the pandemic, the program provides meal kits to those in the local hospitality industry impacted by layoffs, hours reductions, mandatory shutdowns, and capacity restrictions.

In addition to its original D.C. location, the program will also now distribute kits from The Freshman, the yet-to-open cafe at 2011 Crystal Drive.

“Northwest D.C. is not the easiest place to get to for everyone,” Hook Hall Helps founder Anna Valero, who also owns the bar and event space Hook Hall, tells ARLnow. “What was important to us in choosing to expand to another location was accessibility. The hope is being able to provide and meet people more where they are.”

Meal kit distribution is happening every Thursday from 3-5 p.m., starting this week, “while there’s a need,” says Valero.

What made The Freshman attractive as the program’s second outpost is that it is on different Metro and bus lines as Hook Hall, while providing more parking. Plus, Valero says, restaurant owner Nick Freshman’s “values aligned, he’s a fantastic individual in the hospitality community, and he generously offered his space.”

Despite announcing its opening nearly two years ago, The Freshman has yet to open due to the pandemic. Nick Freshman is also a co-owner of Clarendon’s Spider Kelly’s.

The meal kits are made up of three ready-made meals and a “supply” kit with canned soup, granola bars, fruit, toilet paper, and feminine hygiene products.

The kits are being crafted by Valero and a rotating list of local restaurants, including nearby Indian eatery Rasa. Beyond providing meals, the program also helps restaurateurs keep staff employed.

From last March to the end of June, Hook Hall was providing meals on a daily basis, supported by donations to the Restaurant Association Metropolitan Washington. The program raised more than $600,000 and provided more than 10,000 meals during that time frame.

They paused operations in the summer due to patios reopening and restaurants able to increase staffing and operations because of outdoor dining.

However, Valero knew that the winter was coming.

“We made a strategic decision… to essentially hold back as much of the funds that had been raised to that point, knowing that when winter came, it was going to be difficult,” she says.

They re-started the program at Hook Hall at the end of December with distribution on Mondays while adding an Arlington location.

END_OF_DOCUMENT_TOKEN_TO_BE_REPLACED

The new beer garden at Spider Kelly’s is officially open for business.

The beer garden, which is located in the back patio of the Clarendon watering hole, first started serving customers last Thursday. With the sun finally shining after some not-so-nice weather this month, hopes are high for big crowds.

“We are really happy it’s here and our hope is that it will be something that our customers want,” said co-owner Nick Freshman.

“The goal in building it was to create a new outdoor space sort of supplemental to the space that we have inside,” Freshman said. “We kept a lot of the theme from the inside to the outside.”

A local graffiti artist, Andrew Funk, was hired to do a custom graffiti mural to add color to the space and to match the graffiti art inside.

The casual outdoor space offers seating for small and large groups. There is a combination of communal style seating with picnic benches and seating around two fire pits. There is also hightop seating at the bar. The large space offers a capacity of up to 300 people.

Beers, sangrias and ciders are served in the beer garden, and the beer list has been substantially expanded. There are 30 offered cans and 16 tap lines. There are also three homemade sangrias: red, white and sparkling.

For those arriving after work, there is a $4 happy hour drink special. The entire food menu is offered outside. 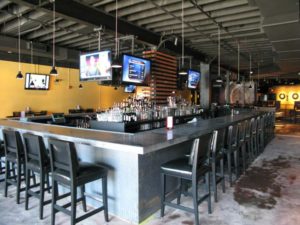 The concept for the original Spider Kelly’s was “a neighborhood hole in the wall,” says general manager and co-owner Nick Freshman. But the former hole in the wall has knocked down a few walls to become one of the biggest bars in Clarendon.

Spider Kelly’s has quietly taken the paper off the windows and opened for business, attracting about 100 customers last night, its first night open since renovations began in December. What would have been a big crowd at a normal bar was well under a quarter of Spider Kelly’s certified capacity of 455.

Pool tables, shuffleboard tables, dart boards and arcade-style video games have been brought in to add “more fun” to the neighborhood hangout. The well-received, value-priced menu has been expanded (more on that after the jump). Outdoor sidewalk seating for about 32 people will be added once the weather is warm enough, probably by the beginning of May.

“We like to think of it as a natural evolution,” Freshman says. He and business partner Nick Langman — who also co-owns Clarendon Ballroom and Eventide Restaurant — dreamed up the idea of a “neighborhood spot, no pretension, just relaxed” back in college, a genesis that perhaps explains the obscure Hemmingway reference (Spider Kelly was a very minor character in “The Sun Also Rises”).

“It wasn’t without a certain amount of trepidation that we decided to expand,” Freshman said. Despite the lagging economy, Freshman says he Langman were impressed by Clarendon’s “resiliency,” including its ability to support the host of new food and nightlife options that have popped up in the past two years.

“I wouldn’t want be in any other neighborhood,” Freshman said, quipping that, in the end, “we figured someone has to get the economy going again, so we decided to quadruple in size.”

Lots of photos, and a first look at the new food and drink menus, after the jump.

END_OF_DOCUMENT_TOKEN_TO_BE_REPLACED 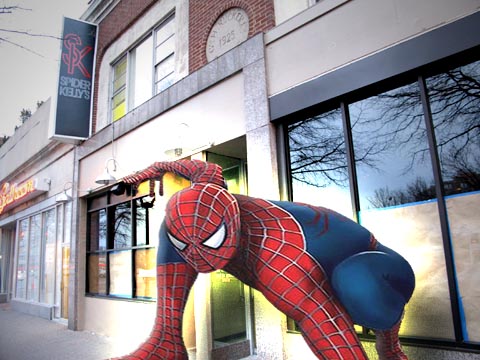 After acquiring two small, adjacent storefronts, Spider Kelly’s in Clarendon is aggressively expanding inside and adding sidewalk seating outside.

Permission for the outdoor seating and a new outdoor sign will be discussed and is expected to be approved at Saturday morning’s county board meeting. If all goes well, the new Spider Kelly’s could open as soon as next weekend.

We got a peak inside yesterday as job candidates trickled out the door, and there’s only one word to describe the interior: massive.

Check back here on Tuesday for interior photos. In the meantime, check out the floor plan, so big it had to be broken up into two separate images.