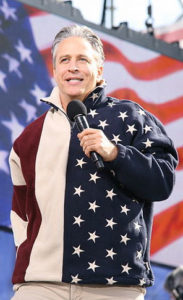 Former Daily Show host Jon Stewart will serve as the co-emcee for a star-studded USO event in Crystal City this month.

The USO of Metropolitan Washington-Baltimore is holding its 34th annual awards dinner on Tuesday, April 19 at the Renaissance Arlington Capital View hotel. The event will mark the USO’s 75th anniversary and will honor people and organizations that have “made a significant contributions to our country’s military community.”

Musical performances by Tony Orlando, the 82nd Airborne Chorus and Miss America 2016 Betty Cantrell, among others, are also planned.

The press release from the USO, after the jump.

END_OF_DOCUMENT_TOKEN_TO_BE_REPLACED

A variety of volunteer opportunities exist throughout the county, but a few might be considered plain fun instead of work. One of them involves being an actor and another involves gardening. Check out the details below. More information about these opportunities and others can be found on the Volunteer Arlington website.