The 8-year-old “Jumbotron” screen outside the WJLA building in Rosslyn has “fallen into disrepair” and needs to be replaced, according to a staff report filed in advance of this Saturday’s Arlington County Board meeting.

WJLA is asking the County Board to approve a site plan amendment that would allow the station to install a new high definition screen in place of the existing standard definition Jumbotron. The new screen would be smaller: 164 square feet compared to the current screen’s 172 square feet. It would also have a rectangular 16:9 aspect ratio, as opposed to the more square 4:3 aspect ratio of the current screen.

County staff is recommending the Board approve the new screen, but deny a separate request from WJLA to dedicate a portion of the screen to “commercial sponsor messages” unrelated to the normal WJLA programming.

According to the staff report:

“Such a use is prohibited by the Zoning Ordinance and a modification to allow it would be unprecedented in the County,” county staff writes.

The applicant agreed to a condition prohibiting deliberate commercial messages on the screen when the Jumbotron was approved in 2003… The Sign Ordinance prohibits the advertising of goods and services not available on the lot in which it is advertized [sic] due to the potential deleterious impacts that would result from such signs, including the proliferation of “billboards,” and the potential for increased sign clutter. There is no precedent for the County Board to approve a modification to this regulation as staff is not aware of such signs having been approved under the current Sign Ordinance.

It’s unclear if WJLA will proceed with the screen replacement if the County Board does not approve the commercial message portion of their request. It’s also unclear what exactly is broken in the current screen. A representative of Allbritton Communications, the parent company of WJLA, did not reply to a request for comment.

No changes to the wrap-around news ticker on either side of the screen are included in the request. 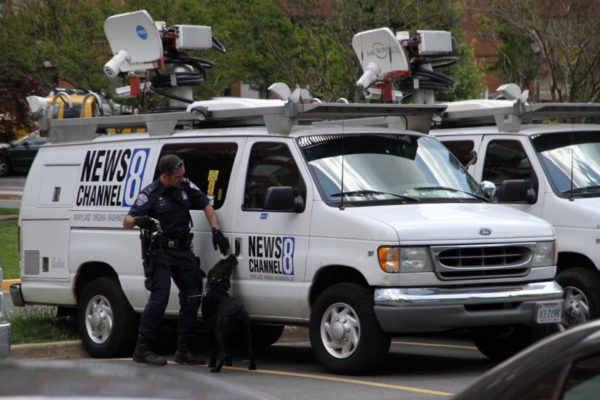 (Updated at 1:10 p.m.) Police investigated a bomb threat at the WJLA (ABC 7) building (1100 Wilson Blvd) in Rosslyn this afternoon.

Initial reports suggest the threat was non-specific. Pedestrian traffic was still allowed in and out of the building as normal as police and building employees searched in and around the building. A police dog could be seen sniffing around news vans at the station’s parking lot.

Police are in the process of clearing the scene. No threats were found, according to Arlington police spokeswoman Det. Crystal Nosal. 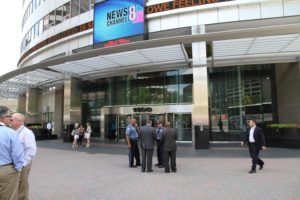 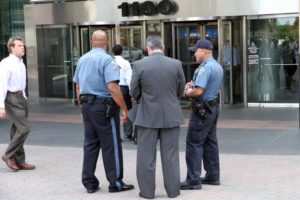 (Updated at 1:20 p.m.) Once upon a time, there was a dream of local news organization that would act less as a walled castle and more as a town square. Instead of competing, it would partner. Instead of talking at, it would talk with.

This news organization would act as a hub of a local news ecosystem, a gateway through which a regional audience could be introduced to the work of independent local journalists and community blogs.

Rosslyn-based TBD.com is planning to lay off most of its staff, according to the Washington Business Journal. All of the site’s sports and news reporters will be let go, according to We Love DC. Among the jobs expected to be eliminated is TBD’s Arlington community reporter position, held by Rebecca A. Cooper.

Instead of reporting news, TBD will now become a niche arts and entertainment site, according to the Washington City Paper.

Two weeks ago it was revealed that TBD, which had been in operation for about six months, was to be taken over by the management of its corporate sibling, WJLA-TV (ABC 7).  WJLA.com, which currently redirects to TBD, will eventually regain its status as an independently-run news web site. Some of TBD’s staff will get jobs running WJLA.com, according to the Washington Post.

END_OF_DOCUMENT_TOKEN_TO_BE_REPLACED 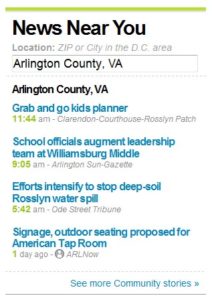 (Updated at 4:15 p.m.) It’s rare to find a news organization that’s actively hiring these days, let alone one that’s expanding physically. But that’s exactly what Allbritton Communications is seeking to do in Rosslyn.

Allbritton’s landlord has applied for a site plan amendment to convert space that was originally intended to be a television studio into work space for the web divisions of its WJLA-TV and Politico properties. The nearly 6,000 square foot space is a former retail bay in the interior mall of the 1000/1100 Wilson Boulevard office complex.

Citing the “evolution of the broadcast television industry into a web-based online media,” Allbritton will take what the board initially approved in July 2008 to be a new TV studio for WJLA and convert it into cubicles and offices for web employees. County staff is recommending the board approve the change at its Saturday, Dec. 11 meeting.

The renovations will help facilitate the on-going addition of nearly 100 employees for TBD, the web and cable division of WJLA, and Politico Pro, a new subscription service that’s being launched early next year, according Saul Carlin, Allbritton’s Director of Special Projects.

TBD currently has 24 web employees and approximately 12 cable employees. Politico Pro is expected to launch with a staff of 40. According to TBD Editor Erik Wemple, the web site is in the process of hiring three new employees — a news writer, a D.C. neighborhoods reporter, and a transit/transportation reporter.

That accounts for not quite 80 of the 100 stated new hires. Additional hirings at TBD are “possible,” Wemple said.

In the site plan filing, Allbritton said the new hires should boost the company’s Rosslyn workforce by about 25 percent, from 400 employees to 500 employees.

“If approved, the change would help us to keep our growing Arlington operations under one roof,” said Carlin. “In this difficult economy, we’re pleased that we can be an engine of job creation in Arlington County.”

“The proximity to the federal government creates opportunities for news organizations in the Washington, D.C. media market that might not be available to them elsewhere,” Carlin added. 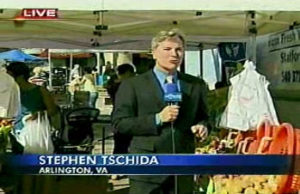 A seemingly minor dispute over food prices at the Clarendon Farmers Market has taken on a life of its own, prompting threats to expel a vendor and a visit from a local TV news reporter.

It started when farmers market vendors started complaining about C&T Fruits and Vegetables, which was selling produce at prices that other growers could not match.

The Clarendon Alliance, which runs the market, tried to convince C&T owner Tracy Debernard to raise her prices so that long-time vendors would not be squeezed out. When Debernard refused, she was told that this would be her last week at the market.

Meanwhile, someone apparently pitched the story to WJLA (ABC 7). Reporter Stephen Tschida showed up yesterday afternoon and reported live from the market. His story included soundbites from plenty of people who like the low prices, but did not include comments from any of the other market vendors.

For her part, Debernard told Tschida that she is considering legal action to force her way back into the market. 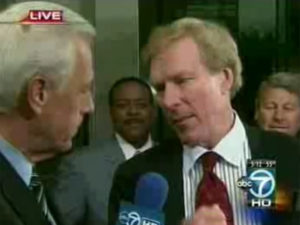