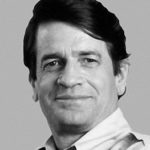 Former Rep. Charlie Wilson (D-TX) has died at the age of 76. During his days in congress Wilson, a former naval officer, lived in an apartment in Rosslyn overlooking the Iwo Jima memorial, the Washington Monument, and the U.S. Capitol.

In the movie Charlie Wilson’s War, the Wilson character played by Tom Hanks called it “the best view in Washington.” The late Charlie Wilson was indeed said to be fond of the the view from his balcony, especially the view of the Iwo Jima memorial.