A number of people have been wondering: where do those dump trucks — the ones filled with snow scooped up off Wilson Blvd., Clarendon Blvd., Crystal Dr., and other main roads — go after they’ve been filled up? And what happens to all that snow? Now we have an answer.

It turns out the trucks (which have been operating since Friday night) actually are dumping the snow in several parks, parking lots and other county-owned locations, including:

Over the next few weeks, the Department of Environmental Services will try to clear the huge snow piles using a mechanical snow melter, according to spokesperson Myllisa Kennedy. The department is also hoping that mother nature will pitch in with some sunshine and warmer weather.

When we visited the Virginia Highlands site, it resembled a lunar landscape. Rolling, six-foot-high hills of snow, along with scattered ice boulders, covered most of the sizable parking lot. The snow rose above “no parking” signs and reached past the bottom branches of some large trees.

If it weren’t for the snow melter, these piles would probably be with us well into spring. 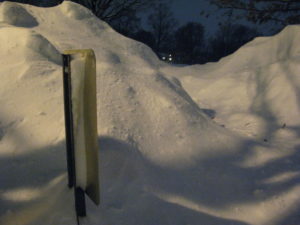 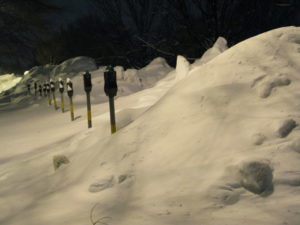 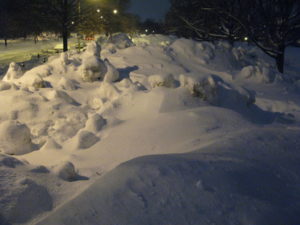