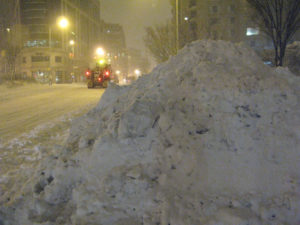 We learned that the county received emergency support from the state in advance of Wednesday’s blizzard. Eight front end loader and 16 operators arrived from Richmond Monday night.

We also learned who was driving all those dump trucks and other heavy equipment, seen on main corridors during the height of the storms. Starting on Friday, on the eve of Snowmageddon, the county contracted with the following companies to provide snow removal services: DHC Corporation, Bell Brothers, Inc., Rock Hard Contracting, Inc., Sagres Construction, Inc., Martin & Gass, Inc., and DRC Emergency Services, LLC.

And we now know that the county had to replenish its salt supply twice in the past week. On Monday, the contractors sent 15 trucks to pick up salt from the Port of Baltimore. The trucks made another salt resupply trip Wednesday night. Arlington has used more than 10,000 tons of salt so far this winter.

More extraordinary numbers, after the jump.