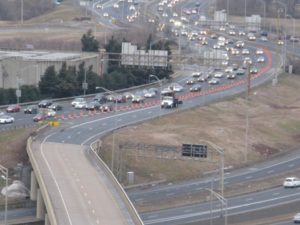 Traffic is backing up on I-395 South as confused drivers slow down at what is usually the busy exit to Route 1. Instead of an exit, commuters are encountering orange barrels.

Even though Arlington County road crews have opened up one left lane of southbound Jefferson Davis Highway (Rt. 1) in Crystal City following last night’s water main breaks, VDOT is keeping the I-395 exit closed, perhaps out of worries about the thoroughfare being able to handle rush hour commuter traffic.

The faulty water pressure regulator that caused last night’s water main breaks has been turned off, according to the county. Meanwhile, crews are still working to repair a water main break on South Eads Street.