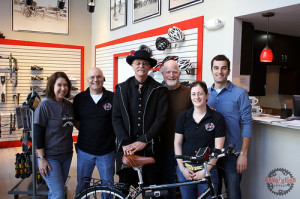 The first customer of Revolution Cycles City Hub, a brand new bike rental store in Crystal City, was no less than Gary Fisher himself. The legendary bike maker is in town this week for the National Bike Summit.

“At first we didn’t believe it,” said Revolution Cycles marketing manager Chris Huller. “We couldn’t ask for a better person to kick this off.”

Fisher, who rented a Trek bike with a polka dot saddlebag, told the staff he’d return tonight to lead a “tweet ride,” a group ride promoted on Twitter.

The ride will leave the City Hub store at 220 20th Street South, near the McCormick and Schmick’s, around 7:00 tonight, Huller said. The destination has not yet been set, but it’s likely to head into the District, possibly ending up at a bar.

City Hub will only rent bikes; it will not sell bikes. Huller says the store’s concept of “a bikeless bike shop” is new for the industry.