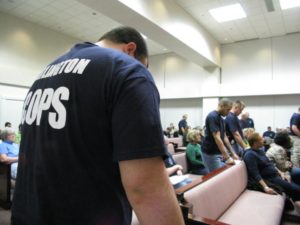 Twenty-three Arlington police officers attended Tuesday night’s board meeting to speak out against a proposed four percent decrease in police department funding. The cuts would result in the reduction of 11 officers from the department’s community policing force and four positions from other parts of the department.

In addition, certain regularly-scheduled pay increases would be frozen and health care costs would increase. Officers say despite promises and words of praise from Arlington leaders, compensation is lower than many comparable local jurisdictions.

“We’re falling behind,” said Ken Dennis, president of the Arlington Coalition of Police union. “We need to keep up with the Joneses.”

Dennis had all the police officers in the room stand up in order to represent the number of officers that will have been lost to budget cuts since 2009 if the proposed budget is approved. 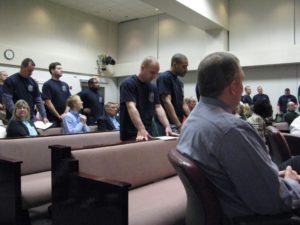 “We make them work harder for less, we do more with less money, [and] we expect them to be happy because they have a job,” Dennis said. “Don’t cut any cops, we shouldn’t have cut them last year.”

Brynn Bennett, a six-year veteran of the force, said officers will begin leaving the department if nothing is done to improve conditions.

“We will hemmorrige skilled officers to those agencies that can better help us provide for our families,” Bennett said.

“When you turn your back on the employees, morale hits an all-time low and the ripple effect will be seen in the services provided,” police officer Mike Rowling told the board.”The message is loud and clear: employees are not a priority.”

Rowling suggested the county raise taxes to the advertised rate, which is two cents higher than the county manager’s proposed rate, in order to properly fund the department. The suggestion drew loud applause.