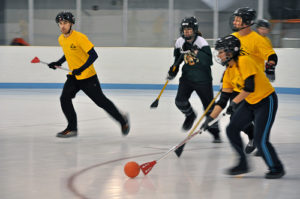 To answer your second question, the game is especially popular in Canada and the upper midwest, but yes, DC has an active broomball league. The league has four local teams that play and practice at the Kettler Capitals Iceplex in Ballston.

Then there’s the travel team, made up of the most hardcore players from each team.

The “Nomadic Hordes,” as the team is called, is flying to the national championships in Blaine, Minnesota today. It’s the first time an all-DC team has gone to the national tournament, which features 69 teams and 1,100 players. 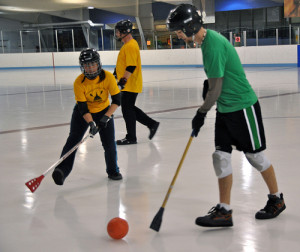 “The talent is phenomenal,” Schradin said of his 12 “Hordes” teammates, four of whom hail from Arlington. He says they’re a physical team, unafraid of hitting the ice and the boards hard, which actually happens fairly often.

Last month the team scrimmaged the grizzled veterans of the Baltimore Broomball Club and lost by a very respectable score of 0-1. If the Nomadic Hordes can keep up with Baltimore, Schradin says, they have a good shot at beating the two Minnesota teams they’ll face in the first round on Friday.