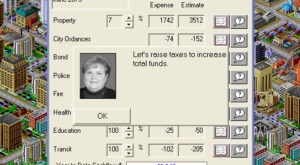 If this were the world of SimCity 2000, computerized voices would be booing Acting County Manager Barbara Donnellan‘s recommended four percent tax hike.

But this is not SimCity 2000. It’s Arlington County. And here, increasing taxes provokes a fairly balanced response between those who think taxes are high enough already and those who take an “increase my taxes, please” approach.

Of the people who spoke at Thursday night’s tax rate hearing, eight asked the board to increase taxes to the maximum advertised rate to prevent cuts to programs and services.

Ten people, a plurality, asked the board to either keep taxes steady or at least not raise taxes to the maximum rate. Find ways to cut expenditures, which rose rapidly during the run-up to the real estate bust, the anti-tax crowd said.

Several pro-tax speakers said they believed they actually represented the majority of Arlington residents. Whether that’s true or not is up for debate, but what is true is that Arlington’s real estate taxes are not egregiously high when compared to neighboring jurisdictions.

The Arlington board will adopt the final FY 2011 budget on April 24.