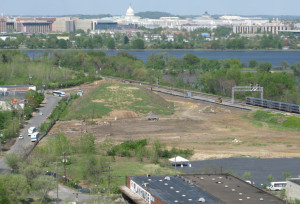 The park is being built just north of Crystal City, adjacent to Old Jefferson Davis Highway, on perhaps the largest open, undeveloped parcel of land left in Arlington County. 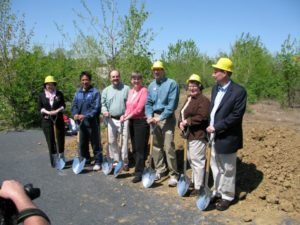 “This has been a long time in coming, and some of us thought it would never come,” joked Smith (see his speech here). The project has faced delays due lead and PCB contamination found on the former industrial site, as well as complications caused by the fact that the site is on a Reagan National Airport flight path.

The funding will also pay for the reconstruction of Old Jefferson Davis Highway, a pothole-ridden, flood-prone stretch of back road that’s perhaps the most poorly-maintained road in the county — and the only way to reach the park. The construction will include bike lanes, on-street parking, landscaped medians and street-side tree plantings.

If all goes according to plan, the park will open as early as the summer of 2011.

A second phase of the park, for which the county is seeking private funding, will include a state-of-the-art aquatics and fitness center with a 50 meter pool, a 10 meter diving platform, a therapy pool, exercise rooms, and a child care center.

Long Bridge Park, named after the early 19th century bridge that used to connect Virginia and the District, is being built on a tract of land with a colorful history.

Most recently a junkyard and an industrial area used during the construction of the Pentagon, the land was also home to saloons, gambling parlors, a race track and brothels in the late 1800s, when it was alternately known as “Jackson City” or “The Monte Carlo of America.” The fun stopped in 1904 when Arlington’s “Good Citizens League” burned much of the town to the ground.

The land on which the park is being built is bordered by the Roaches Run Waterfowl Sanctuary to the east, the George Washington Parkway to the North, Old Jefferson Davis Highway to the west, and a new development, adjacent to 6th Street, to the south. 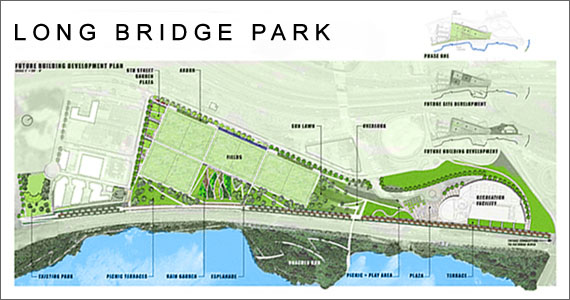