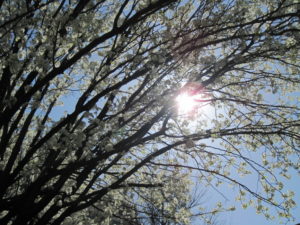 There are a number of ways to celebrate the 40th anniversary of Earth Day in Arlington tomorrow. Below are some that don’t require access to the Pentagon.

From 2:00 to 3:00 p.m., a new rain garden and public plaza will be unveiled in Rosslyn. The temporary park was built on the site of a stalled skyscraper project at North Moore Street and Wilson Boulevard. Learn more about the project from the press release, after the jump.

Big Wheel Bikes in Lyon Village (3119 Lee Highway) is holding an unveiling for a new line of electric bikes from 3:00 to 7:00 p.m. There will be free food, drinks and live entertainment, and attendees will be able to test-ride the bikes on the nearby Custis Trail.

Bus Boys and Poets in Shirlington (4251 Campbell Avenue), together with the Earth Day Network, is celebrating the occasion with an extended happy hour featuring earth-friendly cocktails. The “Green Hour” is taking place from 5:00 to 11:00 p.m.

There are also a couple of Earth Day events this weekend. See our events calendar for more. 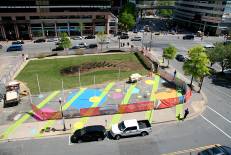 An empty construction lot is temporarily transformed into a rain garden and vibrant public plaza in the heart of high-rise Rosslyn. The JBG Companies, Rosslyn Renaissance and the Rosslyn Business Improvement District teamed to create the mini oasis, which will be open to the community and thousands of surrounding office workers.

The rain garden will take shape as a public plaza with plantings, a stage, benches, tables and chairs in a colorfully-painted setting. The garden occupies the site for the future tallest trophy office space in Northern Virginia, called Central Place, which has been pre-certified LEED (Leadership in Energy and Environmental Design) Gold by the U.S. Green Building Council.

The Central Place rain garden will be planted with native plants, including River Birch trees, Red Tree Dogwood shrubs and switch grasses to capture the first flush or runoff from a rain event. The garden will absorb water, reducing runoff, protecting water quality and preventing flooding. Native plants and microorganisms in the soil will remove pollutants that are carried in the runoff from the adjacent surfaces. By preventing the runoff from flowing into curbs and gutters, the rain garden eliminates the pollutants from going directly into streams and lakes, and eventually into the Chesapeake Bay.

The plaza was spearheaded by Rosslyn Renaissance, an arm of the Rosslyn BID. Cannon Design hosted a design charette, which included numerous professionals and RR Urban Design members such as LSG Landscape Architects and Eighth Day Design to develop a whimsical design which includes brightly-painted stripes and circles that extend to the surrounding sidewalks. The Rosslyn BID contributed to the project with its purchase of tables and chairs, the stage, the paint and additional plantings to enhance the ambiance of the space.

The JBG Companies has long pioneered the rejuvenation of Rosslyn. Given the recent slowdown in the economy, JBG proposed transforming its dormant construction site into a desirable community space. JBG has been very active in working with the community and county government to improve the appearance of construction sites.