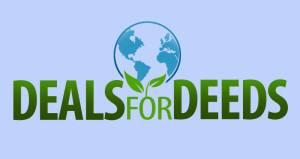 Group buying websites (Groupon, Living Social, etc.) are all the rage right now. For good reason: it’s a beautiful blend of economics and serendipity. Businesses get free promotion, drive sales and foot traffic, and pay no cash out of hand. The websites, in turn, pocket a healthy percentage of each sale as almost pure profit. And customers discover new businesses for cheap.

It’s such an attractive business segment that at least a dozen copy-cat sites have popped up in recent months. Some are blatant knock-offs. Others strive to find a niche.

For Arlington resident Harrison Miller, that niche is charitable giving.

Miller is launching his new website, Deals for Deeds, this coming Wednesday, April 28.

Not only will users be able to get half off or more from a variety of D.C.-area merchants, they’ll also be able to choose one of three charities to receive 5 percent of the sales price (but no, it’s not tax deductable).

Deals for Deeds will also act as a community bulletin board of sorts, publicizing dates for upcoming community events and such. A “shout-out for good causes,” as Miller puts it.

Miller and business partner Josh Hoffman have lined up deals with a number of local merchants. Among the Arlington-based businesses to be featured on the site are fitness instructor Body by Ginny, Rosslyn beauty salon Miracles in the City and Clarendon sunless tanning salon Fit To Be Tan.

At least initially, the charities that buyers may direct their donation to are the Washington Animal Rescue League, Food & Friends and Habitat for Humanity of Washington.

To celebrate its launch, Deals for Deeds is holding a party at ACKC (1529C 14th St. NW, in D.C.) on Tuesday from 6:00 to 8:00 p.m. The public is invited to attend and mingle with local business owners and representatives from the site’s non-profit beneficiaries.

Miller and Hoffman, who are running the business out of an home in Northwest D.C., are not the only people to come up with the charitable group buying angle. A Chicago-based service called We Give To Get provides a similar system for donating to non-profits, although it lists hundreds of charities.

Deals for Deeds will showcase a periodically-changing roster of three charities at any given time, to maximize exposure for overlooked causes. It will also allow buyers to make an additional out-of-pocket donation to their chosen charity via credit card (the site will pick up the extra processing fees).

In starting the website, Miller left a lucrative financial services job to follow his desire to harness the power of social media to do something good.

“I was pretty miserable in the financial services world,” Miller said. He and Hoffman are self-funding the venture.