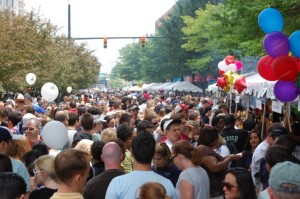 With reporting and photography by Lauren Rosenberg.

Thousands of people took advantage of Sunday’s comfortably warm weather at the 23rd annual Taste of Arlington in front of Ballston Common Mall.

Some complained about the length of the lines at the more in-demand stands, but others credited the queues as serving as a sort of food speed bump that prevented them from stuffing themselves silly.

Beer and wine was available, but from a limited number of stations. The two food tickets for one beer conversion rate may help explain why many people refrained from indulging.

There were fewer entertainment acts this year, but those who did perform — including Marcus Johnson, the Virginia Big Band and the U.S. Army Band Downrange — were able to stay on stage longer. An arts and crafts show, a face painting station and an USDA-sponsored food safety exhibit were among the other festival activities that did not directly involve eating or drinking.

First-time attendees Kayla Knilans of Chapel Hill, N.C. and Angus Wan of Centreville said they were impressed by the variety of foods offered. Knilans said she though the price of attending the event was fair compared to other food tasting events she’s attended in Chicago and Madison, Wis. Their favorite “tastes” of the day included mussels from Argia’s and flatbread pizza from Whitlows.

The event usually attracts about 15,000 people, but Ballston Partnership executive director Pamela Kahn predicted a bump in attendance due to the upswing in the economy and robust online sales — up 300 percent this year.