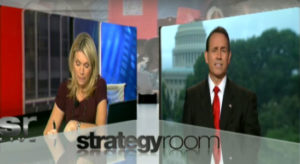 Murray said his biggest issue is “the fact that we have misplaced our Constitutional values.”

“I believe we’re ignoring the Constitution,” Murray said. “I am a big believer in the 10th Amendment… I think our footprint for the federal government has gotten way too big.”

Murray also discussed the wars in Iraq and Afghanistan, as well as his own military experience.