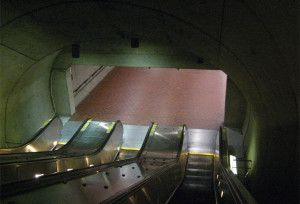 He is apparently known to Metro employees as “the guy who stands at the bottom of the escalators every morning looking up girls’ skirts.” And Erica Walters, the local blogger behind Books Are My Boyfriend, says she had an up-close, personal and very disturbing encounter with this creepy dude at the Courthouse Metro station this week.

Erica writes that she was going up the escalator at 8:30 a.m. on Wednesday when the man suddenly took a photo up her skirt with a cell phone camera, grabbed her and walked away.

To make matters worse, as tears were streaming down her face she asked a “nicely dressed older woman” for help. The woman’s reaction? To shake her head and keep on walking.

Erica goes on to say that she spotted the man on the Courthouse escalators again on Thursday. This time, she had the presence of mind to turn the lens on him. She snapped her own cell phone camera photo, then filed a report with Arlington police (who she says have been “immensely helpful”).

She also talked to a Metro employee, who said she recognized the man in the photo as someone who has a track record of sexual harassment in the station (see the quote above). It’s not clear whether anybody at Metro has ever tried to do anything about it.

Photo via Flickr. No association with the story is implied.