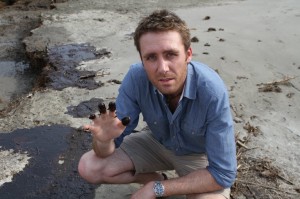 Philippe Cousteau, grandson of the legendary ocean explorer, has been making headlines lately for his efforts to help spearhead a cleanup of the Gulf oil spill.

If you’ve been watching TV coverage of the spill, there’s a decent chance you may have seen Cousteau talking about the disaster.

“This is a catastrophe beyond imagination,” he has said.

But what you might not know is that Cousteau lives in a well-decorated but relatively humble apartment in Pentagon City.

With a resume that includes television host, CEO of his own environmental charity, co-founder of an environmental marketing and design firm, prodigious world traveler and all-around dreamy do-gooder, you might think Cousteau would be living in a trendy loft somewhere in the District. But, for now, he’s chosen practical, unassuming Pentagon City instead.

Here’s hoping he makes a difference down in the Gulf.