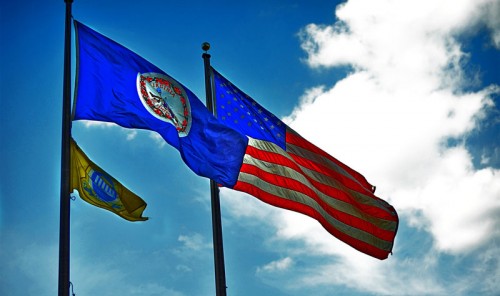 Happy Flag Day — Today is Flag Day. The holiday commemorates the adoption of the United States flag by the Second Continental Congress in 1777. June 14th also happens to be the birthday of the U.S. Army. Today the Army turns the ripe old age of 235.

Post Writes Up EFC Development Battle — The Washington Post is running a story this morning about the increasingly ugly battle between the East Falls Church Planning Task Force and vocal anti-development residents. The task force and their pro-development allies say that development is inevitable given that East Falls Church will be the transfer station to the new Silver Line. Anti-development forces say they don’t want a nine-story “high-rise” among their “bucolic” bastion of single-family homes. The County Board will discuss the task force’s development plan on Tuesday.

Hope for the Best — Del. Patrick Hope, a member of the Arlington delegation to the Virginia General Assembly, has been named legislator of the year by the Virginia Transit Association. The first-term delegate says he was “honored” to receive the award, which recognizes his work on a transit-related bill. More from the Sun Gazette.

They Live (and Cheer) Among Us — Were you watching the U.S.-England World Cup match at Summers Restaurant in Courthouse over the weekend? Fox News says you might have been rubbing elbows with Rep. Devin Nunes (R-CA). Nunes frequents Summers, which, according to Fox News, “is known as one of the best soccer pubs in the country.” For other good soccer venues around Arlington, see our World Cup guide.