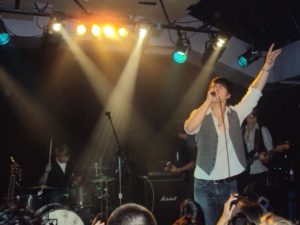 Reporting and photos by Charlotte Gorman.

Dressed in a vest and jeans, Arlington native Struan Shields, 18, steps out to join his four-man backup band while an enthusiastic audience jumps up and down. Singing to an crowd of primarily teenage girls, Struan repeatedly thanks his fans and holds out the microphone to allow them a turn to sing along. They already know all the words, even though this concert is meant to to celebrate the release of his debut EP.

Shields, who will graduate from H-B Woodlawn on Wednesday, isn’t your typical high school singer-songwriter. While others may have their popularity peak with a win at the school talent show, Shields has seen his debut EP hit the top singer/songwriter spot on iTunes.  He recently claimed the number one song download on PureVolume, a website for rising artists. And he has already amassed more than 3,000 Facebook fans.

On the eve of his EP release show at Jammin’ Java in Vienna, Shields seems calm and remarkably humble for a teenager who has won over legions of adoring fans.

“I would never consider myself famous… Fame is such a difficult thing to measure. I have enjoyed the fact that more people are hearing about my music. It is a very cool feeling when people take the time to learn to play my songs, or when an audience knows all the lyrics. That in and of itself is something I still haven’t gotten used to,” Shields said.

Shields writes and records his own music at home, without the help of a record label. In an ambitious attempt at grassroots marketing, he even offered a personal phone call to anyone who pre-ordered his EP. 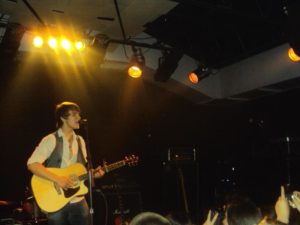 The six-track debut — with songs like “Tell Me Where To Run” and “A Little Bit Longer” — offers a distinct but familiar soft pop-rock sound heavy on Shield’s catchy, heartfelt choruses.

“I find that a lot of my songs are inspired by relationships and their various stages,” he said. “Often hearing a new artist or song will inspire something — not in a copy cat manner, but just a different approach to writing.”

Shields has dreamed about a music career since middle school. Now that he’s widely-downloaded and Facebook famous, he’s looking forward to trying to make it work.

“I started playing music seriously when I was eleven or twelve, and started writing songs at thirteen. From when I started I guess it was always a little dream. I only recently realized it might actually start working out,” he said.

Struan is currently planning a tour for late summer. He’ll head to the University of Virginia in the fall to study music.

Struan Shield’s Say It Soft, Say It Sweet EP is available via iTunes and PureVolume.