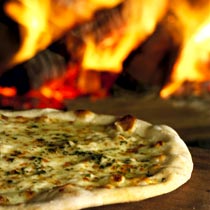 American Flatbread, the wood-fired pizza restaurant that opened on North Fillmore Street in Clarendon last year, is fighting county officials and community associations for the right to open an outdoor patio.

In an exasperated email sent to customers this morning, restaurant management claims they were misled by building owners about the ease with which they would be able to obtain an outdoor seating permit. The email bemoans the “mixed signals, confusion and thousands in lost revenue” caused by the year-long, fruitless effort to get a permit.

The homeowner’s association president for the townhouses across the street from the restaurant “has made it his personal goal to use his new position of HOA president to attack all of our seating,” the email says. The Clarendon-Courthouse Civic Association has also joined the effort to block outdoor seating, despite efforts to find a compromise, according to the email.

“I have gone to meetings of these associations and offered many compromises (close by 9pm, no music, the idea that our patrons aren’t the rowdy ones doing shots and vomiting on the sidewalk on the weekends),” a restaurant representative writes. “But the HOA president and his cohorts don’t want to compromise, they just want to flat out say no and deny you the pleasure and right to enjoy what every other restaurant in the County can offer.”

The Arlington County Board is set to take up the issue at its meeting on July 10. The Planning Commission will discuss the request on Monday. Public hearings may also be held, according to county documents.

American Flatbread has started an online petition to boost its case for outdoor seating. So far, 277 people have signed.

Despite the online support, the restaurant — which specializes in organic and locally-sourced ingredients — seems to think it will lose the fight unless it can mobilize a sufficient number of people to show up in person. From the email:

We have received “off the record” information that the Arlington County Planning Division will recommend that the County Board DISALLOW our application for outdoor seating at their meeting to take place on June 28, 2010 in Room 307, 2100 Clarendon Blvd. at 7:00 P.M.  Why? Because [community association opponents] spent the day last Friday leading key Planning officials around by the nose, parading around our space and characterizing you, our beloved guests and patrons as, “loud, partying, drunkards” that would disrupt their privacy. The only way to defeat these folks is to turn out enmasse on Saturday, July 10 (8:30AM) at the Board Meeting and show your support. Appreciation Party to follow at the restaurant. Thank you for your support!