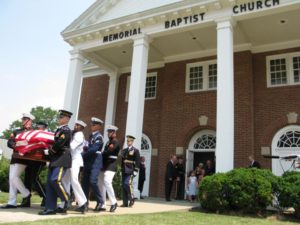 The longest-serving member of congress in U.S. history was remembered as a dedicated Christian, a devoted husband and a lover of music at a memorial service today in North Arlington.

Sen. Robert Byrd (D-W.Va.), who died at the age of 92 last Monday, was a towering figure in the Senate, even as his health began to deteriorate in recent years. He chaired the powerful Appropriations Committee and has twice served as Senate majority leader. He was derided as the “King of Pork” for his tireless efforts to steer federal funds to his home state of West Virginia. His passionate floor speeches against the Iraq war and in support of the Constitution are the stuff of legends.

Byrd, once a local leader in the Ku Klux Klan, filibustered the 1964 Civil Rights Act. His membership in the Baptist church would later prompt him to renounce intolerance and vote for the 1968 Civil Rights Act.

At this morning’s funeral at the Memorial Baptist Church on North Glebe Road, speakers focused more on Byrd’s Baptist beliefs than on his former bigotry. 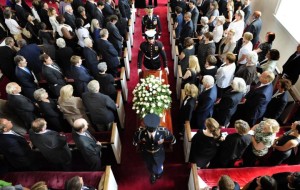 “He described himself to me as a born-again, old-time-religion, Bible-based Christian,” Smith said, recalling a time when Byrd recited 20 Bible verses by memory following a church service.

Music played a central role in the service. The sounds of mountain fiddle music filled the church as mourners took their seats. A 21-person choir later performed “What a Friend We Have in Jesus.”  It was a fitting tribute to Byrd, who was himself an accomplished fiddler and occasional singer.

Following a funeral procession down Glebe Road, Byrd was laid to rest next to Erma, his beloved wife of 69 years, in a private ceremony at Arlington’s Columbia Gardens Cemetery. He was given a 21-gun salute as the two flags on his coffin were handed to his daughters amid the sweltering heat.

On Byrd’s tombstone were the words of Jesus in the Gospel of John, chapter 11: “Loose him and let him go.”