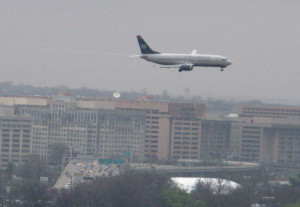 A bill now before congress contains a provision, inserted at the behest of Western lawmakers like Sen. Barbara Boxer (D-Calif.) and Sen. John McCain (R-Ariz.), that would allow for regular non-stop flights from Reagan National Airport to cities like Phoenix, Los Angeles and San Francisco.

Currently, federal regulations ban most flights beyond a 1,250 mile perimeter. The rule is meant to protect local communities from the noise and air pollution produced by the larger planes needed for cross-country flight.

The Washington Metropolitan Airports Authority, Virgina Senators Webb and Warner, and local community groups have come out against the proposed rule change, the Washington Post reports.