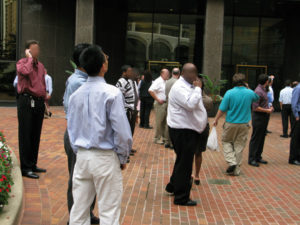 “Someone call 911!” a woman shouted as glass rained down on a popular lunch spot at the base of a sleek Rosslyn office  building around 11:30 Tuesday morning. Up above, a man in the seventh floor had locked his office door from the inside and was furiously breaking a hole in one of the thick windows.

The man — white, mid-30s, balding, well-dressed — worked for Verizon, according to police and witness accounts. It’s not known why he wanted to take his life that day, nor why he chose to do so in a way that thoroughly traumatized the 10-15 people who witnessed it. The word around his office was that he was a quiet man who was divorced and had kids. On this particular day, people said, he was particularly quiet.

The office workers on their smoke and lunch breaks scattered as the glass fell. If it wasn’t for the glass, a witness said, the man could have easily landed on top of someone. Police arrived within seconds of the 911 call but it was too late. The man was on the ground, bleeding.

One woman ran up to the body. She thought she felt a pulse. But police who arrived on scene moments later could find no signs of life. As a crowd began to build, they radioed for someone to bring a white sheet, quickly.

One witness, “Jennifer,” said she was among those near the building’s popular cafe when the glass started breaking. She heard thumps and crashing glass as the man broke the window, and saw him push himself through the tiny hole. She turned her head as he fell.

A former Marine who was among the first to arrive at the Pentagon after a jetliner struck on 9/11, Jennifer said the incident brought the trauma of that day rushing back to her head. As police took photos of the scene, she stood in a corner, surrounded by two co-workers, her eyes red from tears.

In Virginia alone, more than 800 people take their own life every year. If you or someone you know is contemplating suicide, help is a phone call away. Arlington-based CrisisLink operates a 24/7 hotline: 703-527-4077.