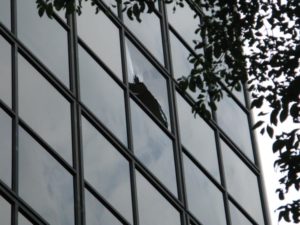 A man died after a seven story plunge from a broken window in a Rosslyn high-rise. Initial reports suggest it was a suicide.

The man landed on a brick courtyard outside of a cafe. A large crowd gathered as police placed a white sheet over the man’s body, which was surrounded by broken glass in clear view of witnesses.

The man was in his mid-30’s, according to Arlington police spokesperson Det. Crystal Nosal.

The building is located at 17th Street and North Nash Street.

Editor’s Note: Normally media outlets do not report on suicides. There are two exceptions: when it involves a public figure, or when it’s done in a high-profile, public area (such as a Metro station). In this case, the incident happened outside the front entrance to a large office building as people were heading out on their lunch break. There were a number of witnesses. Due to the public nature of the incident, we decided that it was of sufficient public interest to report.

IMPORTANT: The following photos (after the link) contain imagery that some readers may find disturbing.