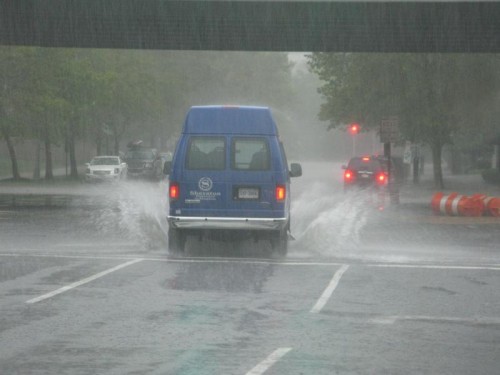 Update at 11:30 p.m. — In Arlington, 8,800+ Dominion customers are still in the dark at this hour. Most are expected to have power by morning.

Arlington was pounded by high winds and heavy rain this afternoon as a severe thunderstorm rolled through the area, turning roads into rivers and knocking out power in several parts of the county.

As of 4:45, more than 8,400 Dominion customers were without power in Arlington. A single, widespread outage is affecting the area around Arlington Ridge Road and the eastern end of Columbia Pike.

Arlington appears to have been spared the worst of the storm’s wrath, however. In the City of Alexandria, nearly twice as many homes lost power. And in the District, authorities were reporting numerous instances of trees down and rescues in progress.