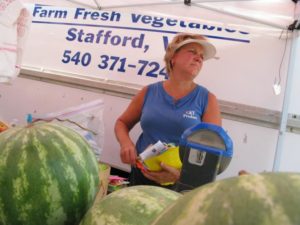 After being barred from the Clarendon Farmers Market for two weeks, C&T Produce is back.

DeBernard said she was allowed to return last week after Cooperative Extension agents from Stafford and Spotsylvania counties inspected her 400 acre farm and determined that she was growing all her own produce. Other vendors at the farmers market had alleged she was keeping prices artificially low by importing her produce from other farms.

The feud came to a head four weeks ago when DeBernard was told it would be her last time selling at the market. Later that day an ABC7 reporter showed up and reported live on the controversy.

“I’m very happy to be back,” DeBernard said today as a steady stream of customers inspected the fruits and vegetables under her red, white and blue tent. “It appears that the customers are very happy for me to be back, too.”

Not so happy, she says, are the other vendors who pressured the group that runs the market to kick her out.

“A lot of the other vendors don’t talk to me,” DeBernard said. “But that’s alright, I come here to sell my product, pack up and go home.”