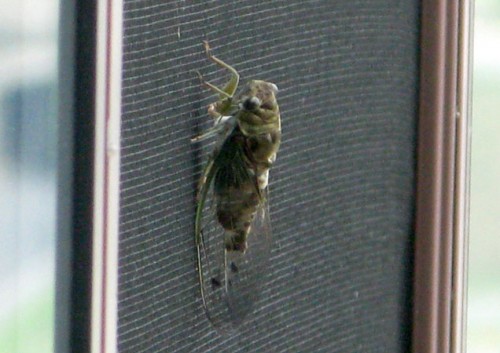 Cicadas Are Back — It’s not the swarm of 2004, but there are a few cicadas around this summer. This one was spotted on a window screen in Pentagon City.

Breast-Feeding Mix-up at Virginia Hospital Center — In January, a newborn went missing in Arlington’s Virginia Hospital Center. The child’s mother eventually found him being breast-fed by another woman — the result of a hospital mix-up. The Washington Post reports that the incident has given rise to questions about the frequency of such incidents and the possibility that the baby could be harmed as a result.

Moran Votes ‘No’ on Afghanistan Funding — Rep. Jim Moran (D-Va.) voted against a bill to provide an additional $37 billion in funding for the war in Afghanistan. “There exists no military solution to the conflict in Afghanistan,” Moran said in a statement. “The mission we set out to accomplish following the attacks on September 11th – the rooting out of al Qaeda in Afghanistan – has largely been achieved, thanks to the hard work and sacrifice of hundreds of thousands of American military and civilian personnel… Instead of increasing our troop presence, we should be limiting our mission in Afghanistan.”