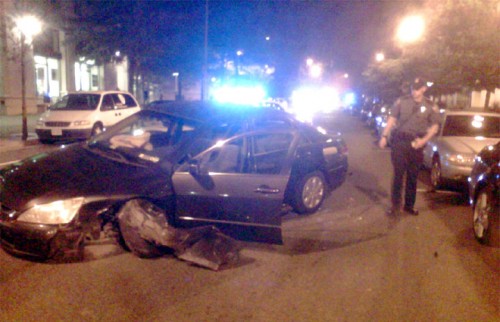 You might have seen our Tweet about about a car accident in Courthouse Friday night, but we’re bringing it up again because it was so unusual.

Around 11:00 p.m. Friday, Clarendon Blvd was shut down between North Wayne Street and North Adams Street, near Velocity Five Restaurant, due to an accident involving a Honda and a parked Audi.

A witness says the Honda was traveling in the direction of the Courthouse Metro station at a high rate of speed, when its front driver’s side tire somehow clipped the Audi’s rear passenger side tire.

The contact apparently caused both wheels to come off the axle. The Honda came to rest a few yards away from the Audi, with much of the driver’s side front quarter panel ripped off, the wheel dislodged and the front end angled into the asphalt. The rear wheel on the Audi, meanwhile, was at a 45 degree angle.

It could have been worse. The driver of the Honda appeared unhurt, even though airbags deployed. No other pedestrians or passengers were involved, thankfully.

Although the damage to the Audi will probably be costly to repair, the partially-amputated wheel was just about the only visible sign that it had been involved in an accident. Plus, the shiny $100,000 Mercedes parked in front of the Audi did not appear to be damaged.

No word yet on whether the driver of the Honda will face any charges.

END_OF_DOCUMENT_TOKEN_TO_BE_REPLACED

More Stories
What Kind of a Restaurant Would You Like to See in Rosslyn?Arlington PD Not Planning on Changing Immigration Policy After Cuccinelli Opinion