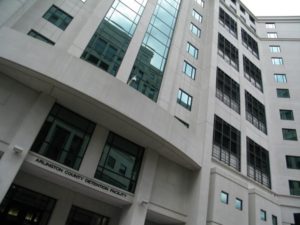 You may not realize it, but there’s a building in Courthouse that’s home to about 600 prisoners of Arlington’s criminal justice system. The Arlington County Detention Facility is the first urban high-rise jail in Virginia and “one of the most technically advanced direct supervision facilities in the county,” according to the county Sheriff’s Office, which is responsible for running the lock-up.

The current facility, built in 1994, is unimposing inside and out. Forget your tour of Alcatraz, this facility looks more like an office building than a prison to the average passerby. Inside, groups of prisoners are held in residential units that combine the functionality of a jail cell, prison yard and dining hall.

But make no mistake: behind the non-threatening interior — which somewhat resembles a public high school with a whole lot of doors — this is a facility built for security. Since it was built, not a single prisoner has escaped.

“Secure” is also a feeling you get while walking through the jail. The Hollywood image of mean-looking, hardened criminals who leer at guards and outsiders and are constantly looking for a fresh fish to shank (apologies for mixing movie metaphors) does not seem to apply here. 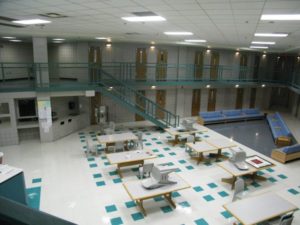 In fact, people were pretty friendly. One inmate, when told that his cell was going to be photographed, darted in and cleaned things up a bit, just to be polite. Another struck up a conversation about his artwork and a recent play he wrote.

Fights, jail administrators say, are extremely rare. Six months ago, a deputy was jumped by two inmates in the mental health ward. The scuffle ended when two “workforce inmates” pulled the culprits off of him. (The workforce inmates — who prepare food, pick up garbage around the County in orange jumpsuits, etc. — are generally seen as the best-behaved of the bunch.)

The biggest challenge for the housing unit guards who work most closely with the inmates isn’t fights, riots, contraband or escape attempts. Instead, like a teacher at a middle school, one guard said the challenge is “dealing with all the personalities.”

Here’s a glimpse of the Arlington County Detention Facility by the numbers: