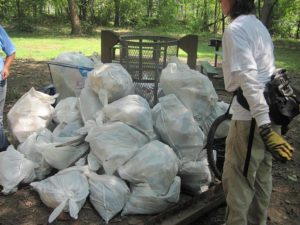 A group of 20 volunteers conducted one of the more eventful clean-ups of Four Mile Run over the weekend.

The group, which cleaned up the portion of the stream that runs through Barcroft Park, filled 28 trash bags with items found in or around the water. Among the items they found were a bicycle, a computer, a 70 pound metal beam and — most amazingly — the severed head of a goat, horns and all.

“I have no clue what it was doing down there amongst the plastic bottles, pens, styrofoam cups, baseballs, etc… but it smelled quite foul and we bagged it with all the other garbage,” Dan Bronson of Arlington’s Community Volunteer Network wrote in an email. “It still had the skin on it so it hadn’t been there too long.”

Bronson said “everyone was mystified” as to how the goat’s head got here in the first place. One theory was that it washed downstream during Thursday’s storm. 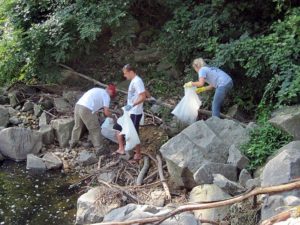 “Who knows!” Bronson wrote. “In my experience Four Mile Run stream clean-ups tend to have at least one quite unusual object.”

To say the least.

Saturday’s stream clean-up was a joint effort of several volunteer organizations. There were six wounded warriors on hand from the veteran groups Team River Runner and The Mission Continues. Arlingtonians for a Clean Environment and the Community Volunteer Network sent volunteers and helped to organize the event. A couple of Lockheed Martin employees also joined the clean-up.

In addition to the stream clean-up, volunteers also pulled and threw away a number of invasive plants found around the park. 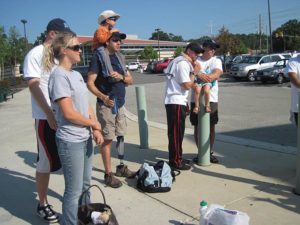 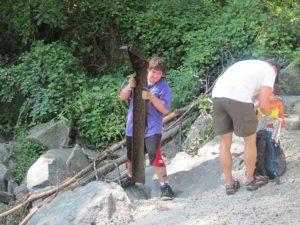