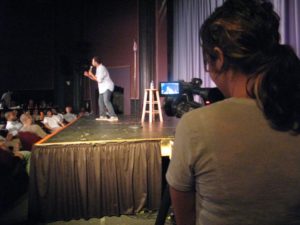 To be honest, I thought Eric Patrick (@ericisfunny on Twitter) was not going to be very funny.

With the past music, photography and acting aspirations of Real World cast members in mind, I was preparing myself for pity laughter and polite applause when Eric took the mic as the last act of the night on Friday.

The stand-up comedians who preceded him on stage at the sold-out Arlington Drafthouse were actually quite funny — but it was Patrick’s name on the marquee out front. Would the former State Department employee live up to the billing?

His confident, energetic and engaging performance was surprising given that nothing on The Real World: New Orleans up to this point has really shown his funny or outgoing side. In an interview after the show, Eric readily admitted that his sole contribution to last week’s episode was carrying a drunk cast member from the sidewalk to her bedroom. 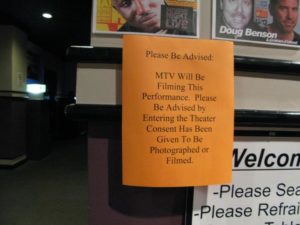 But that’s about to change. Eric says the last three episodes of the season will feature him and his comedy more prominently. And even though he’s “the normal one,” Eric says he wasn’t able to avoid drama with cast member Ryan in some upcoming episodes.

Despite the lack of screen time, Eric says he often gets recognized on the streets of Arlington. He was hoping that basic cable stardom would be a one-way ticket to getting more girls, but says it has instead been a magnet for older men and unattractive women.

In the end, Eric says he loved living in New Orleans, but the Real World experience wasn’t without its low points.

“The pros outweighed the cons, and it was mainly the city,” he said. “It was one of the best cities I’ve been to.”

Eric, 25, returned to Arlington after taping the show and is currently living in his grandparents’ house near Virginia Hospital Center. The grandparents, Roy and Peggy Jones, now live in Georgia and let Eric keep watch over the home, which has been in the family for at least four generations.

The Jonses were at the show Friday night. Mrs. Jones said they’re supportive of Eric — who they described as “quiet” — even when he’s making jokes about receiving oral sex in Roy’s rocking chair.

“That’s fine, it’s life,” Mrs. Jones said. “That’s the way we are, we always support our children… whatever they want to do we tell them to do it 150 percent.” 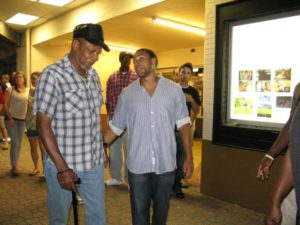 Now that he’s off the show, Eric is following that advice and focusing on his comedy career. He’s no longer working for the State Department, and he’s turning down a job offer from the Department of Homeland Security. Instead, he plans to tour East Coast colleges with the “No Comic Left Behind” crew he performed with on Friday. And he has picked up an agent, perhaps with the hope of landing TV or movie gigs.

Eric says he might have to leave Arlington behind to follow his dreams. He sees New York, L.A. or Miami as possible destinations down the road. In the more immediate future, he plans to buy an old “pedophile” van to facilitate his envisioned comedy tour.

Arlington will always feel like home, however, because it was the one constant in a childhood that saw him move from Arlington to Philly to Phoenix and back to Arlington. A product of a divorce, Eric went to high school in Chantilly, but his grandparents have always lived in Arlington and were a major influence in his formative years.

Eric had a few Arlington-related jokes for the crowd, but saved his best material for the interview.

“I didn’t do too much Arlington bashing tonight,” he said as cameras from MTV rolled in the Drafthouse’s green room. “Sometimes I say the roads here are bumpier than Flavor Flav’s penis.”

As for the question on the mind of all the ladies in the audience Friday night — yes, Eric is single. He says he has a few women he sees regularly, but nothing serious. And if any stalkers are interested, Eric says his favorite Arlington hangouts are Cowboy Cafe, Spider Kelly’s, Whitlow’s and Ri Ra.

The Real World airs Wednesday nights at 10:00 on MTV. 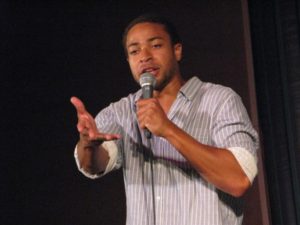 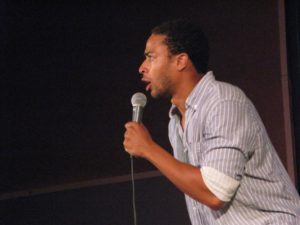 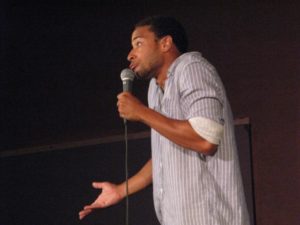 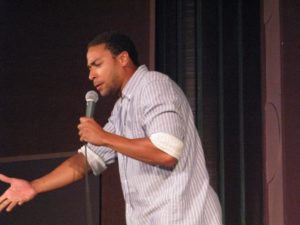