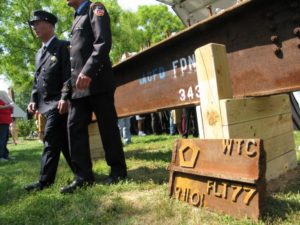 Hundreds gathered outside Arlington County Fire Station 5 in Pentagon City this morning to commemorate the donation of a steel beam from the World Trade Center.

Dozens of New York City and Arlington County firefighters were on hand for the ceremony. Music was provided by a large bagpipe corps and a youth choir from Georgia.

The steel beam — one end twisted and torn with remnants of concrete still attached — was from the North Tower of the World Trade Center, according to Paddy Concannon, president of the FDNY Fire Family Transport Foundation, which arranged the donation.

Following the beam’s unveiling, firefighters took turns reading the names of those who died in the 9/11 attack on the Pentagon.

The beam was transported from Brooklyn to Pentagon City on Saturday. It was accompanied by hundreds of motorcyclists on its journey to Arlington.

The steel will remain on display outside the fire station until a more permanent memorial is constructed.

END_OF_DOCUMENT_TOKEN_TO_BE_REPLACED

More Stories
To Do This WeekendHelp Wanted: Event Photographers