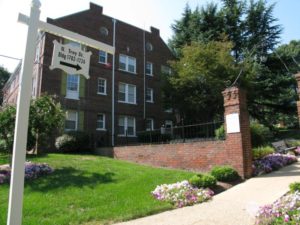 The historic Colonial Village apartments (the portion owned by Wesley Housing Development Corporation) will be renovated and most of the units converted to low income housing, under a plan that’s up for discussion at a county hearing next week.

The proposal calls for renovations to begin around March of next year, according to a leasing agent. Renovations would proceed several at a time. Tenants will be “relocated” during the renovation process.

The details about the low income housing conversion are a bit sketchy at this point, but initial reports suggest all but two dozen or so apartments will be designated low income housing under the plan, which could force some existing tenants out.

Colonial Village was among the first garden-style apartment complexes in the U.S. when it was built in the 1930s. Wesley owns 162 apartment units, which are home to about 400 residents.

A county housing counselor told ARLnow.com that more details will be revealed on Wed., Sept. 8, during an Arlington Tenant-Landlord Commission hearing. The hearing will take place at 7:30 p.m. in Azalea Room (lobby level) of 2100 Clarendon Boulevard.

One Colonial Village resident we heard from was upset that there have only been two “resident meetings” about the plan leading up to next week’s hearing.

Today’s renovation news follows our report earlier this week about major renovations at the 1020 North Quincy Street apartments in Ballston.