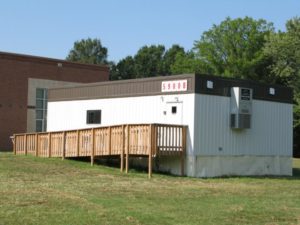 Arlington Public Schools will be opening next week with at least 600 more students than a year ago and 14 new relocatable classrooms to accommodate the burgeoning student body.

Relocatable classrooms —  superintendent Dr. Patrick Murphy prefers the term “learning cottages” — are here to stay in Arlington County. The school system, having determined that the portable units are ten times more cost-effective than physically building a new classroom, has started buying rather than leasing the “relocatables,” and has started buying them four at a time for a further cost savings.

This summer APS added four relocatables each to Glebe, Carlin Springs, and Barrett elementary schools. One relocatable was installed at Nottingham Elementary and H-B Woodlawn, according to APS spokesperson Frank Bellavia.

The school system also likes relocatables because of the flexibility they provide. They can be moved from school to school, can be put into reserve in case of a sudden influx of students, and can be removed if the student population enters a cyclical downturn, as it did in the 1990s.

Indeed, although student enrollment is projected to increase through 2020 (see chart below), school board member Sally Baird says the increase is as much a “generational spike” in certain areas of the county as it is a result of Arlington’s steadily growing population. That growth, she says, is only temporary.

“There will be, at some point, a plateau,” Baird said.

In addition to the “relocatables” — APS is also implementing a number of strategies specifically intended to allow then to squeeze in more students without laying a single brick.

Class sizes have increased by one student across the board, with the exception of the fourth and fifth grade classes. At high schools, classrooms are being utilized six out of seven periods, up from five. And Washington-Lee High School is offering “zero period” classes before the start of school, a strategy that may spread to other high schools.

One thing that the school system is no longer considering is redrawing school boundaries. Although the idea was under consideration, it was panned by parents when polled for an APS survey.

“One of the top messages and feedback [from the survey] was: don’t change the boundaries,” Dr. Murphy said during a community chat last month. The survey suggested that parents considered relocatable classrooms the lesser of two evils when the other option is changing schools.

The redrawing of boundaries was also considered by consultants the school system hired to study crowding problems earlier this year. Their conclusion: since all schools are at or near capacity, redrawing boundaries would be of little benefit.

Editor’s note: This article has been revised with an updated number of relocatable classrooms, as provided by APS. Other figures cited in this article are sourced from Dr. Murphy’s community chat and Power Point slides from prior school board meetings.