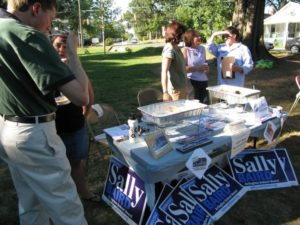 Arlington Democrats chowed down on homemade chili and talked up their slate of candidates at the party’s annual Labor Day Chili Cook-off.

A crowd that included county board members, school board members, state legislators, elected county officers and Democratic donors gathered outside the Lyon Park Community Center for the end-of-summer tradition, which also featured drinks, music and a moon bounce for the kids.

Guests of honor included the three local Democrats up for reelection this year: county board member Chris Zimmerman, school board member Sally Baird and congressman Jim Moran. Virginia House of Delegates minority leader Ward Armstrong was also on hand for the afternoon event.

The cook-off was largely an upbeat affair for the well-entrenched local party, though the gloomy national outlook for Democrats was on the minds of many.

“If the election was held next Tuesday, we would lose the majority in the House and the Senate,” Moran told the crowd, citing polling data. 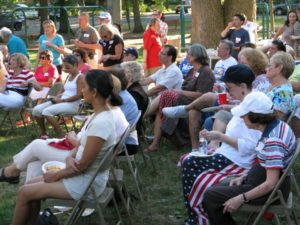 “But the election isn’t being held next Tuesday,” Moran continued. “This will be a good election, we’re going to turn this around… let’s get it done.”

“This is really an exciting time to be a Democrat,” Zimmerman said during his brief remarks. “There is so much at stake across the entire country.”

Later, Zimmerman — who’s facing both a Republican and a Green Party opponent in November — said he isn’t taking anything for granted. Already, he has started knocking on doors, attending public events and holding fundraisers.

“Realistically, we have to work for this one,” he said, noting that there is no U.S. Senate or presidential race to mobilize Arlington’s Democratic base this year.

In his speech to the gathered Democratic faithful, Moran let on a bit about how he plans to run against his Republican opponent, Patrick Murray.

Moran said Murray is on the wrong side of the “civil rights issues” of abortion, gay marriage and the military’s Don’t Ask Don’t Tell policy.

Moran, Zimmerman and Baird and their respective opponents are all expected to participate in a debate sponsored by the Arlington County Civic Federation tonight. The debate will be held at 7:30 p.m. at the Virginia Hospital Center Hazel Conference Center (1701 N George Mason Drive).

More photos from the cook-off and a list of winners of the various chili categories, after the jump.

Chili teams and their dishes were awarded the following prizes: