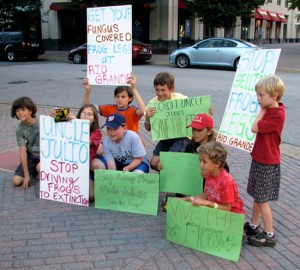 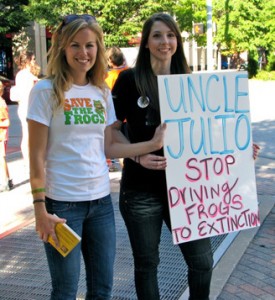 A group determined to kick frog legs off American menus came to Ballston over the weekend to protest in front of Uncle Julio’s Rio Grande Cafe.

The protest was organized by Save the Frogs, a California-based group dedicated to saving “the world’s remaining amphibian species.” This was the second time this year the organization held a protest outside the Ballston Uncle Julio’s. The non-profit has also demonstrated outside Uncle Julio’s restaurants in Maryland and Texas.

“America is on track to overtake France and Belgium to become the number one frog-eating country on the planet,” Save the Frogs founder and Manassas native Dr. Kerry Kriger said in a statement. “The frog leg trade is responsible for the spread of infectious diseases, the depletion of wild frog populations, and the spread of harmful invasive species”.

The CEO of Uncle Julio’s has previously denied that the chain’s frog legs come from an endangered species or are raised in an unhealthy environment.

Photos courtesy Save the Frogs