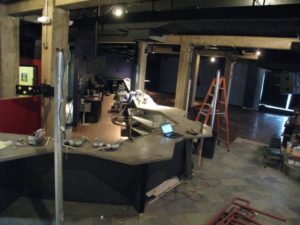 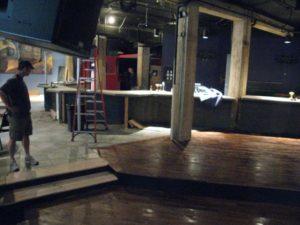 As soon as next weekend, Clarendon Grill will reopen after nearly two months of renovations. Walking through the doors, the long-time C-Grill fans will see a space both familiar and completely different at the same time.

Nearly every surface in the bar has been changed, says owner Peter Pflug. From the long cast-in-place concrete bar to the large-tiled bathrooms to the new dance floor, what was once old and beat up and is now clean and new. That old Clarendon Grill musk, from 14 straight years of eating, drinking, smoking and dancing since the last renovation, has been replaced with the smell of fresh lacquer.

“We’re excited that people, given the state of the place before, will say ‘wow’ when they see us again,” Pflug said.

The biggest change is probably the bar. It’s now longer and more open, which should make it much easier to get a drink on crowded weekend nights. The bar also features “bump-outs” — areas that you can call ahead and reserve that are shaped in a way that make it easier to have a conversation with a group of friends.

The new Clarendon Grill has the same number of beer taps as before, but the taps themselves are new. There will be a new, simplified “gastropub-y” menu. The theme will change marginally from “construction” to “industrial,” with illumination provided by painted steel streetlights procured from a nearby used car lot. Clarendon Grill will remain “sporty” — with sports showed constantly on the new flat screen TVs — but it will not be a sports bar.

The back patio, which was redone six months ago, has not been changed. The focus on live music is unchanged, but bands may now start playing a bit later to encourage dinner business.