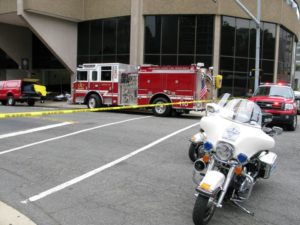 Update at 3:55 p.m. — The package has been deemed “non-hazardous” and the scene is being cleared.

Update at 4:50 p.m. — Townhall tells us via Twitter that the suspicious package was not in their office.

Earlier: Police have shut down streets around 1901 North Moore Street in Rosslyn due to a suspicious package in the building. The package is reportedly being x-rayed at this time.

Workers standing outside the fire line tape set up outside said the suspicious package was located on the seventh floor, which houses the offices of Townhall.com, among other businesses. However, when reached on the phone after police were first dispatched to the scene, a Townhall.com employee said she was not aware of the situation.

The Rosslyn Circulator bus stop is located behind the fire tape. We’re trying to find out where the buses are being rerouted to.