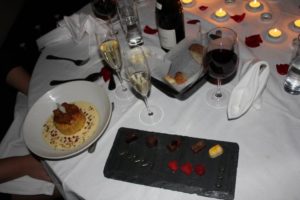 Local Realtor Laura Rubinchuk and her now-fiance Mitch Schwartz went to Lyon Hall on their second date. When Mitch popped the question over the weekend, the popular Clarendon eatery came to them.

“I came up with the idea because Lyon Hall has great significance in our relationship and I wanted it to be a part of our proposal,” said Schwartz, who teaches high school English for Loudoun County Public Schools. “Lyon Hall… was where I fell in love with her.”

While proposing at the restaurant itself may have seemed like a natural choice, Mitch had bigger plans. He wanted more privacy, more intimacy for the big moment. He wanted to spread flower pedals around the room, light candles, put on their favorite song and surprise Laura without two dozen people gawking at them. But he still wanted Lyon Hall to be a part of it. So he talked to manager Mark Fedorchak.

“I went in to Lyon Hall and spoke with Mark and asked if he would be open to doing a dinner in our condo which is next door” to the restaurant, Schwartz said. “He loved the idea and asked if he could have some freedom in planning it.” 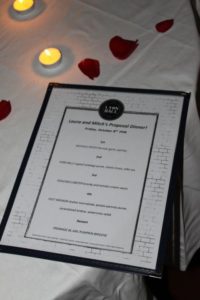 “Thursday night I sat down with Mark and he had drawn up a menu for me to look over and it was an amazing five course meal with all of our favorites on there,” he said. “We discussed wine options and agreed that I would come back on Friday… to give him a key and let them set up.”

When the big night arrived, Fedorchak, a waiter and another manager delivered silverware, place settings and ice buckets, which Schwartz hid just before Laura arrived home. After she got dressed for what Mitch said was going to be a date night to celebrate a recent anniversary, he gave her a series of envelopes with clues that sent her around Arlington to places with special meaning to their whirlwind, five-month romance.

In the meantime, Schwartz went about setting up the room. With the condo now looking like their own private restaurant, Laura returned and Mitch greeted her at the door.

“I asked her to dance and immediately asked her a question I always ask: ‘What would you say if I asked you (to marry me) tomorrow?’ She responded with her usual response of ‘Why don’t you ask and find out’.  I said ‘okay’ and got down on my knee.  She, thankfully, said yes.”

Then, with a phone call, the meal started.

“Every 30-40 minutes they would politely knock on the door, bring in the next course, fill our water, wine and champagne glasses then quietly take the dishes from the previous course and leave,” Schwartz said. “The meal was outstanding as everything was hot and cooked perfectly for us.” 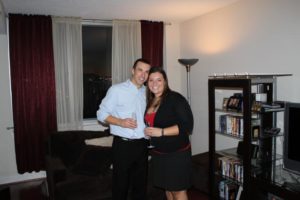 “While this was not free, it was way above and beyond” the call of duty, Schwartz said. Lyon Hall told them they had never done anything like it before.

“Clearly they were happy to be able to make that memorable night even more memorable,” he raved. “Their excitement level included letting the whole staff know and telling customers that night about what they were doing for us.”

Rubinchuk, who met Schwartz on Match.com in April, said she wants everyone to know the extent to which Lyon Hall went out of their way to make their night special.

“I just really want to do something great for them since they went so far above and beyond for us,” she said.

The evening’s menu, according to Schwartz: