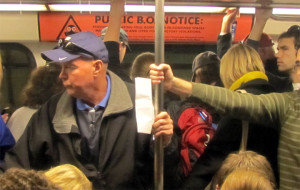 But while setting the record may sound like a positive development for the beleaguered Metro system, those who actually took Metrorail before and after the rally told tales of overcrowded trains and stations.

It was so bad after the rally that some local residents decided to return to Arlington on foot rather than brave the “zoo” at the Metro stations near the mall.

To give you an idea of how crowded it was, check out this video from the Rosslyn Metro station before the rally.